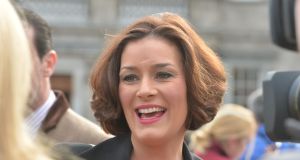 Kate O’Connell said the “future leader” of Fine Gael must be involved in the formal talks on Britain’s withdrawal from the EU. Photograph: Alan Betson

A Fine Gael TD has urged Ministers who wish to succeed Enda Kenny to show their “mettle” by standing up and questioning the Taoiseach’s leadership.

Kate O’Connell made her comments in light of Irish preparations for the formal talks on Britain’s withdrawal from the European Union, which are due to begin by the end of March.

“I do think it is important that we send the future over rather than the past,” Ms O’Connell said, adding that the party should not “blindly accept because of Enda Kenny’s experience that he is the best man for the job”.

“It might not necessarily be a good thing. And they see him coming in Europe and they know what he is about,” the Dublin Bay South TD said.

“The lads in Europe are very familiar with the way Enda Kenny operates, by all accounts. In any negotiations in a business you try and send in the lad who is going to blindside them. I don’t see why dealing with Europe is any different.”

She told The Irish Times that the “future leader” of Fine Gael must be involved. She said the main impetus for questioning the entire Brexit process, including Mr Kenny’s leadership, must come from senior Ministers. She also said the State needed to be tough in the talks in emphasising its own national interest and relationship with Britain.

“I have the height of respect for Enda Kenny but he is not going to be the one left with the fallout of Brexit.

“It is somebody else and a new generation of Fine Gael that will be left with it. I do think the future leader should be heavily involved and that person has to step up.”

Mr Kenny’s supporters maintain he is the best person to lead in light of Brexit and claim he can put his contacts with other EU leaders to good use once the formal negotiations on Britain’s departure begin.

Ms O’Connell denied questioning Mr Kenny’s authority was being “mutinous”, but added the main questioning of the Brexit process – which includes leadership – must be done by those who aspire to succeed him.

She also said that the EU views Ireland as “collateral damage” during the economic crisis and the same could be expected during the Brexit talks.

“Our problem is our country and we have to be very conscious of the fact that Europe viewed us as collateral damage the last time and sacrificed us the last time,” she said. “That sacrifice has messed up the lives of generations of this country.”

“What is the naughty step here? They can’t throw us out, and the euro is the currency - they can’t devalue our currency.

“As a country, we really have to stand up to Europe on this one. This, for me, is the most important fight we will ever fight. And whoever is going over, and whoever is batting for Ireland, is, to my mind, setting out the standard of living for future generations of this country. And it is really, really important who we send over.”