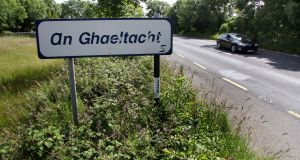 The council failed to implement a linguistic provision which was attached to An Bord Pleanála’s planning permission for a housing development, an inquiry found. Photograph: Joe O’Shaughnessy

Kerry County Council was responsible for a “serious breach” of planning law when it failed to implement a language condition designed to protect the linguistic and cultural heritage of Gaeltacht areas, an Coimisinéir Teanga Rónán Ó Domhnaill has said.

Details of an investigation carried out by the Coimisinéir are outlined in his office’s annual report for 2019, which was published today.

The investigation found that the council failed to implement a linguistic provision which was attached to An Bord Pleanála’s planning permission for a housing development in Baile an Fheirtéaraigh in the Corca Dhuibhne Gaeltacht in 2004.

The condition meant that the owners or long-term tenants of 75 per cent of houses built in a development called Na Cluainte in Baile an Fheirtéaraigh would be required to demonstrate their fluency in the Irish language.

Following a complaint by a member of the public that this condition had not been met, Mr Ó Domhnaill initiated an investigation.

While the language condition was included in an agreement between the council and the developer, the investigation found that “there were fundamental faults in this agreement that rendered it not fit for purpose”.

The investigation revealed that the construction commenced before an agreement was made with the developer about the language agreement, the provisions of the agreement were not appropriate to achieve its objective, and the actions taken to implement the agreement “demonstrated a lack of clarity, procrastination and a lack of commitment”.

“It was also clear that no long-term occupier was ever interviewed to determine their ability in Irish nor was any purchaser of any of the houses that had an Irish language requirement attached to it ever contacted for the purpose of ensuring that this requirement was fulfilled.”

It was recommended that the council inform the Coimisinéir’s office for the next five years of any planning permission granted in the Kerry Gaeltacht for large planning applications or applications in respect of three dwellings or more.

This was the first time an investigation was carried out relating to the application of a language provision of the Planning and Development Act 2000.

Mr Ó Domhnaill said the investigation was “important” due to the impact an increase in non-Irish speakers could have on “the future of Irish as a community language in the Gaeltacht”.

The Coimisinéir Teanga, whose role includes ensuring compliance by public bodies with statutory obligations under language legislation, warned of the dangers faced by Gaeltacht areas if laws that are meant to protect the Irish language are not implemented.

“Not only is it the first time a language provision of that Act has been investigated, it also highlights a serious breach of the planning law by Kerry County Council . . . a breach of a law that is there to protect the use of the Irish language in the Gaeltacht,” he said.

A total of 704 complaints were made to the office about difficulties accessing services through Irish in 2019. Eighteen per cent of complaints came from Gaeltacht areas while 35.3 per cent came from the Dublin region.

“These difficulties occur as a result of insufficient personnel in the public service with competence in the Irish language and due to legislation that isn’t comprehensive enough.”

Belfast councillors back investigation into Storey funeral 18:21
Coronavirus: One death, 25 new cases reported in State 18:25
Children who go abroad must self-isolate for 14 days before return to school in September 18:10
Angry Taoiseach calls for resumption of work on new National Children’s Hospital 17:56
Man tried to steal cars while high on crack and holding chihuahua 17:51