Martin criticises Cabinet’s ‘lord it over the British’ Brexit handling 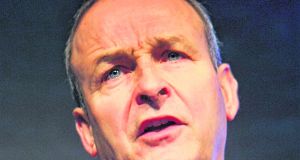 Fianna Fáil leader Micheál Martin: “I think there was a degree of triumphalism that did get the back up in unionist quarters and elsewhere which I think has given rise to all of the difficulties.” File photograph: Gareth Chaney/Collins

Micheál Martin has criticised the Government’s early handling of Brexit negotiations, saying he would have resisted the temptation to “lord it over the British” and adopted a “less triumphalist” approach.

The Fianna Fáil leader, who has kept Fine Gael in power with a confidence-and-supply arrangement during the Brexit countdown, said, however, that he did see the prospect of a breakthrough deal by October.

“I think myself in terms of the megaphone diplomacy that accompanied the first (withdrawal) agreement, I think that could have been avoided,” he said of dealings between the Irish Government and UK administration then led by Theresa May.

“I think there was a degree of triumphalism that did get the back up in unionist quarters and elsewhere which I think has given rise to all of the difficulties.”

In an interview on Virgin One’s The Tonight Show, Mr Martin said seamless trade across the Irish Border had to be protected, but added that in the aftermath of the Brexit referendum, UK politicians had no blueprint on how to deliver its departure from the EU.

“I think we are looking at a Northern Ireland-specific solution. I think it will be difficult for unionism,” he said.

A restored Northern Ireland Assembly would likely offer a mechanism by which to secure unionist consent, he said, adding it was in everyone’s interest to avoid a no-deal exit.

“I think [British prime minister] Boris Johnson is in a corner. Sometimes circumstances and events can conspire to lead to a certain outcome, and I think there is a prospect of a deal here by the end of October. And I think a lot depends on the European attitude as well, which I think has to be receptive.”