Martin confident government programme will be signed off on Monday 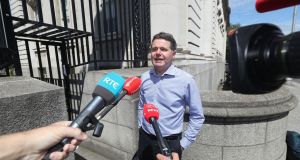 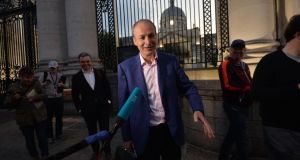 Fianna Fáil leader Micheál Martin has said the three party leaders will meet on Monday morning and he is confident the final programme for government document will be signed off fully by then.

Mr Martin said much progress had been made in the meeting between him, Fine Gael leader Leo Varadkar and Green Party leader Eamon Ryan on Sunday but a few outstanding issues remain.

“A lot of people are working long hours over the last couple of weeks and still tonight obviously,” he said.

“Truly, we should be in a position to sign off [on Monday] morning. I think the work represents a significant departure in terms of Irish politics and also in terms of the type of society we will have in the future. We have very challenging times ahead of us,” he said.

Earlier on Sunday evening, Minister for Finance Paschal Donohoe said talks between the party leaders is not likely to conclude until Monday.

Mr Donohoe said a lot of good work was going on and the parties “would be in a position tomorrow [Monday] to give everybody an update”.

He expressed confidence the State would have a government by the end of June, but that depended on each of the three parties ratifying the deal.

“It will then fall to all of us to take that case to our party members to ask them to consider us. But I believe it’s very possible that tomorrow we will have a programme for government that . . . will also get the balance right between what we heard on February 8th [the general election] and the reality where we are here today. My party has played a role in trying to get that balance right.”

‘We have an urgency’

Green Party Eamon Ryan said negotiations on the document had all but concluded and the major stumbling blocks had been overcome.

He said the main reason the final document had not been signed off on Sunday was that each party wanted to review it before agreeing it and sending it to the parliamentary parties.

“Most issues are resolved,” he said. “We had a long discussion on pension and other tax issues [and] that was a large part of the discussions.”

On pensions, he said: “What’s resolved on pensions is that we will establish a commission which will make recommendations and look at it in detail.”

He said it was a complex issue that was not just about age but about PRSI contributions, auto-enrolment and other issues.

Asked if the agreement would pass muster with the parliamentary party and with the membership, he replied: “They will have to make their own judgment . . . This is a complex document and let people decide. I hope they will [approve it]. ”

Besides differences over the pension age between Fianna Fáil and Fine Gael, sources from all three parties said unresolved issues include national finances, indexation of taxes, the Occupied Territories Bill as well as Fine Gael’s wish to allow for income tax reductions, if conditions improve.

The Fianna Fáil and Fine Gael parliamentary parties are due to hold virtual meetings on Monday to discuss the document, which runs to more than 100 pages.