‘In my 25 years, nobody from Fine Gael has ever called to the school or even phoned’ 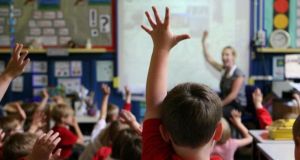 The primary school principal said he had no political affiliation.

A primary school principal has defended his decision to place letters in children’s schoolbags highlighting work by Fianna Fáil representatives he believes helped secure funding for the school.

The letter was sent in recent days, ahead of the local and European elections taking place on Friday.

Parents of children at Cadamstown National School in Co Kildare received letters in recent days from the principal, Paddy Judge, stating: “In my 25 years, nobody from Fine Gael has ever called to the school or even phoned the school to see if they could do anything for us”.

“I have no political affiliation and will ask any politician for help in relation to any issue affecting the school.”

By contrast, the letter claims, a Fianna Fáil councillor and a TD helped secure funding for a school car park and a new pathway from the school to the local community centre.

On the need for a new car park, the Mr Judge’s letter states that while councillors were sympathetic, Cllr Darragh Fitzpatrick was “the only one who promised funding and in the end the entire funding for the car park came from his allocation”.

In relation to a new pathway for the school, Mr Judge wrote that, again, funding was allocated by Fianna Fáil councillors.

“When the pathway to the hall was done by a contractor for the council in 2016, again the funding was allocated by Cllr Dáire [sic] Fitzpatrick and Cllr Paul Ward, Fianna Fáil, with support from James Lawless TD. James Lawless had called to the school earlier and asked if there was anything he could do for us.”

When the school required an extra classroom building instead of a prefab in 2009, the letter states that Cllr Fitzpatrick’s father, the late Fianna Fáil TD Michael Fitzpatrick, successfully lobbied on the school’s behalf.

The letter has been shared on social media, where it has been described by some posters as “inappropriate” and “disgraceful”.

However, Mr Judge defended the letter to The Irish Times on the basis that he was stating the facts of how the school has secured funding in the past.

“When I wrote I did think that maybe some people could see it as inappropriate, but these are the facts and people can interpret them as they see fit. I am afraid this is the way things are done,” he said.

“It’s about appreciating when people put their money where their mouth is. If all the councillors contributed, we would have had these developments much sooner, but it didn’t happen.”

Mr Judge said he was not a member of any political party and does not live in the constituency.

“I’m not canvassing for votes and I have no political affiliations. I live in Westmeath,” he said.

He added that former Labour TD Emmet Stagg had been a “gentleman” and lobbied for the school to receive increased learning support hours in 2012.

Mr Judge said there had been a pressing need for a carpark at the 75-pupil school for safety reasons, due to rising numbers of pupils being dropped to school by car on a narrow stretch of road.

Mr Judge also said there was an urgent safety requirement for a path to the community centre and playing pitches, located about 500 metres away.