Brexit: It’s far too late for UK to say what it wants, says Varadkar 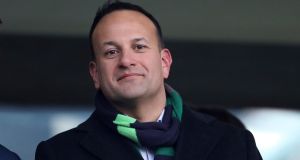 Taoiseach Leo Varadkar has said it is “far too late” in the Brexit process for the United Kingdom to tell the European Union what it wants as part of an exit deal.

Speaking in Dublin, Mr Varadkar was also dismissive of suggestions that British prime minister Theresa May may further postpone a vote on the Brexit withdrawal agreement that is due to take place in the House of Commons this week.

Mrs May is battling to save her Brexit strategy as negotiations with the European Union remain “deadlocked”, amid warnings that the prime minister is heading for another crushing defeat in Tuesday’s crunch Commons vote.

Tory Brexiteers said rejection of the withdrawal agreement is “inevitable” unless Mrs May is able to secure significant changes to the Northern Ireland backstop. “Technical” talks between officials took place in Brussels over the weekend and the PM spoke to European Commission president Jean-Claude Juncker on Sunday night. But a Downing Street source said the negotiations remained “deadlocked”.

Speculation in London has suggested Mrs May could replace the so-called meaningful vote with another vote which would allow MPs show what type of Brexit they would find acceptable.

The Taoiseach said such a prospect “really misses the point”.

“I do hear some suggestion that the votes may be called off in favour of a new vote as a result of which the House of Commons would tell the European Union what they want. That really misses the point,” Mr Varadkar told reporters. “We’re two and half years if not three years since the referendum. It is far too late for the United Kingdom to tell us what they want. The withdrawal agreement requires a compromise and this withdrawal agreement is already a compromise.”

“Obviously the first step on Tuesday is the next vote on the withdrawal agreement in the House of Commons. That may pass or it may not pass, I can’t predict the outcome of that vote but if it doesn’t pass I understand there will be a vote on Wednesday to take no-deal off the table and potentially a vote on Thursday then around an extension.”

The remaining 27 European Union members will have to agree to grant an extension of the negotiating period beyond Brexit day on March 29th, if one is requested by London. The Taoiseach said it has to be an “extension with a purpose”.

“The uncertainty around Brexit is already worrying citizens. It is damaging business confidence, it is effecting our agriculture in particular. It will affect other industries as well as the week goes on. I really think if there is going to be an extension it has to be with a purpose, that extension.”

The threat of a no-deal Brexit is not one “that the European Union or Ireland is making”, he added.

“The 29th March is a self imposed deadline and the United Kingdom parliament can take the threat of no deal — for Ireland, for Northern Ireland, for Britain, for Europe — off the table at any time.”