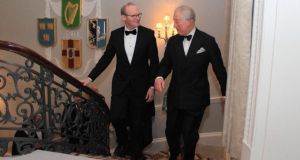 It’s been a busy week for Tánaiste and Minister for Foreign Affairs Simon Coveney as Britain’s Brexit bandwagon lurches unsteadily towards God only knows what.

While the thrilling highlight of his week must have been Tánaiste’s Questions in a rip-roaringly dull Dáil on Thursday, the previous night’s events in London were exciting too.

Coveney welcomed Prince Charles and his wife Camilla to a St Patrick’s Day dinner in the Irish embassy which quickly turned into a Brexit-fuelled mutual admiration session between the Irish hosts and their British guests.

There would have been much more bonding over the Connemara cured ham and organic Irish salmon only for the fact that everyone was already agreed that the bonds which already exist couldn’t be any tighter.

It wasn’t all pleasantries and honeyed words for Coveney on the night.

He had to meet Karen Bradley, the UK secretary of state for Northern Ireland who is a role model for bulls contemplating a retail career in fine china.

Bradley’s latest howler saw her robustly declaring in the House of Commons that killings by soldiers in Northern Ireland during the Troubles were “not crimes”.

In the ensuring uproar, the hapless Bradley managed two inadequate and grudging apologies. At the third attempt, following that meeting with Coveney, she issued a full apology saying she was “profoundly sorry” for her comments.

The contretemps wasn’t mentioned at the embassy.

Charles and Camilla remain as enchanted as ever with Ireland and are regular visitors here since Queen Elizabeth’s historic trip in 2011.

“I must say, I’m slightly amazed to find that we’ve managed to visit 15 counties already. I am quite determined before I drop dead and finally lose my marbles that I should get around the remaining 17,” said Charles.

The Duchess of Cornwall, wearing a groovy, full-length, green-beaded Kaftan which was a gift from the King of Morocco, told officials from the Department of Foreign Affairs they had “wonderfully alluring accents” and she can’t wait to visit Ireland again in May.

UK politicians at the bash in Belgravia were led by Theresa May’s chief of staff Gavin Barwell and her unofficial deputy David Lidington. Both are intimately involved in the Brexit talks, with Lidington holding the additional position of Head of Being Nice to the Irish (in public at least).

Some are asking the question: Is there a way through or can Ireland mount a comeback in the Six Nations?

Tom Watson, the dramatically slimmed-down Labour deputy leader, was looking pleased as punch now that he has established an alternative power base to Jeremy Corbyn within the party.

John Bercow, speaker of the House of Commons, was in great form, no doubt looking forward to another week of nearly meaningful drama in Westminster.

Actor Kenneth Branagh (who gets younger every year) sat next to Camilla and she kissed him as she left.

Cork’s own Fiona Shaw – who regularly rubs shoulders with the royals – was also there as was Adrian Dunbar, who read Derek Mahon’s poem, Everything is Going to be Alright (very appropriate for the times we live in, if not necessarily a guide to the future):

“The sun rises in spite of everything
and the far cities are beautiful and bright.
I lie here in a riot of sunlight
watching the day break and the clouds flying.
Everything is going to be all right.”

Dunbar’s reading was part of a performance of words and music put together by Philip King and featured a harpist, a piper and a singer in a green dress. According to our man in the black tie with the canapés and small sherry, “it was all a bit like a posh Feis”.

These are difficult times in the relationship between Ireland and the UK.

The Tánaiste recognised this during his speech at ambassador Adrian O’Neill’s reception to mark St Patrick’s Day. Or “St Patrick’s Season” as Prince Charles, with a smile, more accurately noted.

“It is both a privilege and a pleasure to be with all of you this evening to celebrate the British-Irish relationship in all of its depth, richness and complexity” at what was “a pretty serious time for everybody” said Simon Coveney.

Everybody looked suitably grave as he continued: “All of us here this evening understand that it’s not exactly a time of plain sailing in this relationship. There are some big issues at stake.”

“Some are asking the question: Is there a way through or can Ireland mount a comeback in the Six Nations?”

He looked towards some of the guests from Northern Ireland – Nigel Dodds of the DUP, independent Unionist Lady Sylvia Hermon and Sinn Féin’s Michelle O’Neill.

“I think perhaps that question is one to which Nigel, Sylvia, Michelle and I can probably agree the answer.”

“And there was about 1,000 people on the other side and the first person she randomly chose to meet and greet was my grandmother.”

Coveney said it was a total fluke but everyone accused him of organising it. When Prince Charles visited Cork last year, he also met Coveney’s 99-year-old grandmother, who raised her family in London.

“Some of them are still the most English people I know, one of whom even voted for Brexit – the one I have a difficult relationship with – but he means well.”

Should the Taoiseach’s personal stock continue to fall in the wake of his disappointing satisfaction rating in this week’s opinion poll, fitness fan Leo Varadkar might conclude that the decline set in around the time he was told his 40-year-old body has a metabolic age of 53.

He was clearly quite shocked when the news was broken to him on RTÉ’s Operation Transformation programme last month. Leo is into exercise and eating well and he looks very trim and the picture of health.

On the other hand, some of his less svelte political colleagues in Leinster House were hugely cheered by this turn of events.

But Peter Fitzpatrick, Leo’s former colleague who left the parliamentary party last year over Fine Gael’s stance on abortion, is not one to rub the Taoiseach’s nose in it.

On Tuesday, the Independent TD for Louth was on Michael Reade’s radio show on LM/FM to talk about the Oireachtas gym, which he uses once a week.

“I am not ashamed to say that I like to look after myself. I went and I done that metabolic test that Leo Varadkar done. Leo Varadkar is a 40-year-old man. The next thing, he has the body of a 53-year-old man” said the former manager of the Louth senior football team.

Imelda, having kicked up quite a fuss when asking them, had already left

“I’m 56, coming on 57. Smith’s Chemist in Dundalk there recently done a free test for anybody in the area. Myself and my wife went one Saturday afternoon. I went in and I didn’t know what to expect. I walked to the door, I could barely get in the door because me head was that big – they told me I’d a metabolic body of a 41-year-old man.”

Not only that, but his wife, who is the same age as him, “walked in with a 41-year-old body as well”.

Reade was intrigued. But what about the Taoiseach – isn’t he a very fit guy too? He goes to the gym and runs marathons and all that sort of stuff.

Peter wasn’t about to throw any credit in that direction.

“”Well, in fairness, I give him 10 out of 10,” sniffed the TD. “He’s the best person I’ve come across on social media – I don’t know how he does everything because he seems to be involved in everything.”

Then Peter quickly moved on to say what he had started to say, and was obviously determined to say, before the interviewer cut in with his observations about the Taoiseach’s fitness level.

“Listen, and I’m not trying to scaremonger: There’s a TD in the area at the moment and I spoke to that person recently – he’s 61 years of age. He went in and got the same test done as I did and he walked out and he told me he had the body of a 85-year-old person.”

And who might that be, Peter? He didn’t name anybody, leaving it up to the voters to figure it out for themselves. It wasn’t too difficult.

There are four other TDs in Louth. One is a woman (Sinn Féin’s Imelda Munster). That leaves Gerry Adams (SF) Fergus O’Dowd (FG), and Declan Breathnach (FF). Gerry has passed the 70 mark so he can be ruled out. The youthful looking Fergus, from the Drogheda end of the constituency, is the same age. So that leaves Breathnach, who is based in Dundalk.

We contacted Declan to find out if he is the decrepit TD who is only trotting after Peter in the metabolics stakes.

“It certainly isn’t me. Sure I’m only 60. My money is on Fergus O’Dowd” he insisted. “Anyway, it’s the brain that matters. You’re as young as you feel.”

On the subject of metabolics and Peter Fitzpatrick, Declan, who is Fianna Fáil’s spokesman on cross-Border co-operation had this to say: “It would be great if he engaged his body with the people of Louth as much as he moves it in the gym. Maybe Peter is hoping I might fall off my perch and give him a better chance of re-election.”

We hear some of Shane Ross’s cabinet colleagues were less than pleased when they heard about his “donkey” outburst in the Dáil on Thursday.

He seemed particularly irritated by Sinn Féin’s Imelda Munster and her Brexit related questions, although their testy exchanges are par for the course.

But Shane, aka Winston Churchtown, was stung by her criticisms of him at the previous week’s Transport Committee meeting when she expressed her incredulity that he was unable to attend due to non-specific “pressure of work”.

It was reported in this column that she subsequently saw him taking a topical issue in the Dáil while the committee was still in progress and witnessed him afterwards greeting a party of schoolchildren on a tour of Leinster House.

Fianna Fáil’s Robert Troy speculated that he was probably in the Member’s Bar enjoying his elevenses that morning.

Which turned out to be true.

In the Dáil, Winston told Imelda her performance wasn’t a patch on the contributions from two of her colleagues who were like “thoroughbreds” while she was “like a donkey at the last race, at the last fence”. Out of earshot, near the Ceann Comhairle’s desk, he then accused her of telling this column about his “elevenses”.

However, let she who is without sin cast the first stone.

Imelda was caught out herself, at the same meeting she excoriated the minister for missing. The Louth TD, along with colleagues, posed some tough questions about the rural transport system to witness Anne Graham, chief executive of the National Transport Authority.

As the meeting drew to a close, Anne Graham said to the chairman: “I can deal with Deputy Munster’s questions, if you like.”

But Imelda, having kicked up quite a fuss when asking them, had already left.

The Chairman was quite keen for this to be noted on the record.