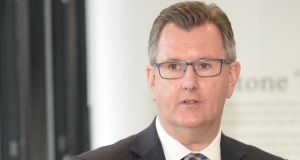 DUP MP Jeffrey Donaldson said: ‘We need to get to a place where we agree that there were things that went wrong and should never have happened and we move on’. File photograph: Dara Mac Dónaill/The Irish Times

Relationships on the island face “real challenges” if the legacy of the Troubles is not dealt with as people commemorate “very difficult centenaries” in the coming years, DUP MP Jeffrey Donaldson has said.

He said there was a need for the North’s political institutions to be reformed and for a “joined-up approach” to deal with “our troubled past” and move towards the “ultimate objective” of the peace process: reconciliation.

The country was going to have “five years of really difficult discussion and debate alongside dealing with these very difficult centenaries,” he said.

“We do need to move beyond retribution, beyond the point where we are in some cases, and maybe on both sides, trying to rewrite the narrative of the Troubles,” said Mr Donaldson, speaking at the assembly at the Druid’s Glen resort.

“We need to get to a place where we agree that there were things that went wrong and should never have happened and we move on, not that we forget the past because the victims are there, but we have to move this beyond where we are now.”

Irish and British parliamentarians met at the assembly for the first time since the killing of journalist Lyra McKee in Derry last month. In an emotive final debate on “recent political developments,” they spoke positively about the impetus her death might bring to restore Northern Ireland’s power-sharing government.

Lord Malcolm Bruce, the British Liberal Democrat politician, said the 65 per cent rise in support for the Alliance Party in Northern Ireland’s council elections earlier this month showed a “pulling together of the centre” but warned that the opportunity and mood for change “could easily evaporate”.

He said that he had visited a secondary school in Derry where every single student in a class of final-year students put their hands up when asked if they saw violence returning to the streets of the city.

“That was a few months ago. I’d like to think that things are a little bit more positive but it took the death of a journalist for that to happen,” he said.

Labour TD Joan Burton urged UK politicians to use the cross-party discussions on Brexit to pause and consider the potential for violence and what the UK leaving the EU could mean for Northern Ireland.

“The impact of a bad Brexit on the island of Ireland is a real risk; it does empower people who still believe in guns and bullets and violence and bombs to step out of the shadows,” she said.

British Labour MP Karin Smyth, the party’s shadow Northern Ireland minister, went further, warning of the risk to democratic structures “across these islands,” saying that “everything is now moving”.

She attributed the drive for Brexit to the loss of faith in democracy and how people do not feel that they have say over basic services such as education and health.

“Brexit will not end in three weeks or in six months. It is a long-term process and something we are not addressing,” said the MP who voted to remain in the EU in 2016.

Pro-Brexit Conservative MP Martin Vickers told the assembly that the idea that a second referendum would resolve Brexit was “a complete myth”, He said his constituents were angry that Brexit had not been delivered and warned against using a new prime minister as “an opportunity to go back to square one”.

“The anger and frustration is building up. We have got to bring it to a conclusion,” he said.

Lord Reginald Empey, former UUP leader, praised Ms McKee’s work, recalling her research on the murder of a Ulster Unionist MP for a book and visiting an Orange family from Co Armagh to write about how they celebrated July 12th.