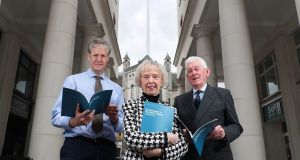 A government department should be set up to address sectarianism in Northern Ireland, according to a new report by Ulster University.

The body would have responsibility for the development, co-ordination and oversight of anti-sectarian policies throughout the North.

“Sectarianism should be addressed from the centre of government, in a thorough and concerted manner on the basis of clear principles and policies,” the report said.

The recommendation is among more than 50 proposals outlined in Sectarianism in Northern Ireland: A Review, which will be launched at a conference in Belfast on Tuesday. It will be addressed by Senator George Mitchell, who chaired the peace talks that led to the signing of the Belfast Agreement, and a number of civic leaders.

The report, by Prof Duncan Morrow, was commissioned by the Ulster Bank’s Sir George Quigley Fund, which aims to promote social wellbeing.

Among the report’s suggestions are the setting up of a civic body which would be empowered to inform public debate and convey its findings to government.

It also recommends that businesses could create a fund for community and social benefit and progress and support the integration of anti-sectarian principles into corporate social responsibility programmes.

The report also suggests that the creation of a Youth Assembly should be a “priority” and consideration should be given to lowering the voting age to 16. Every school should plan its curriculum as “shared education”, it said.

The Department of Justice and the NI Policing Board should establish a “priority fund” dedicated to repairing or establishing relationships between the police, young people and communities, especially where there is evidence of paramilitary pressure.

The leaders of all major churches should unite in an agreed programme to encourage acceptance of and respect for other faiths.

The report also highlights the potential for arts, sport and culture to create opportunities for shared experiences and learning and suggests an investment in a shared sports anthem for Northern Ireland.

Prof Morrow said the “deeply tragic events of recent weeks sharpen the focus on just how dangerously close we remain to this residual threat”.

“We have a duty of care and leadership to ensure that the expectation, aspiration and potential of the next and future generations is met and not stifled by sectarian polarisation,” he said.

Black Friday ‘represents the worst of human nature’ says Waterford retailer 17:12
Exiting Level 5: What will reopen and when will it happen? 17:11
Hotels, retail, hairdressers, gyms, churches to open next Tuesday, followed by restaurants and gastropubs on Friday 17:15
Third man jailed over failure to give undertakings to stay away from farm 16:46
Ex-TD seeks orders against Facebook and Twitter over allegedly defamatory posts 16:00

1 Hotels, retail, hairdressers, gyms, churches to open next Tuesday, followed by restaurants and gastropubs on Friday
2 Forget Black Friday, welcome to Green Friday - 30 Irish retailers with great deals
3 Exiting Level 5: What will reopen and when will it happen?
4 Child (4) stranded on Luas platform when separated from mother, court hears
5 Businesses can show ‘Dunkirk spirit’ by taking new direct ferry to France
Real news has value SUBSCRIBE