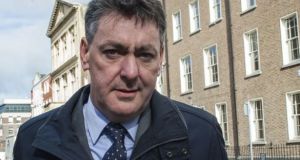 After 27 years in the Dáil and Seanad, Billy Kelleher has turned his face firmly towards Brussels in the May 24th election although a date for the selection convention has yet to be confirmed. File photograph: Brenda Fitzsimons

Fianna Fáil enterprise spokesman Billy Kelleher has left his party leader Micheál Martin and the entire membership in no doubt about his electoral intentions as the ardfheis got underway on Saturday.

The long driveway up to the Citywest Hotel in Southwest Dublin is entirely covered in election posters depicting the Cork North-Central TD with number one on them, confirming beyond any doubt his intention to run for the European Parliament and a clear veto of his party leader’s demand.

Mr Martin wants his poll topping TD to run in the general election where he was thought likely to bring in a second candidate.

But after 27 years in the Dáil and Seanad Mr Kelleher has turned his face firmly towards Brussels in the May 24th election although a date for the selection convention has yet to be confirmed.

More than 2,000 members are expected to gather for the ardfheis, including hundreds of local election candidates, as the party gears up for the European and local elections.

Brexit, housing and climate change are set to dominate proceedings although there are no motions to vote on, and Mr Martin will again account for the decision to continue the confidence and supply arrangement with Fine Gael in the face of the crisis over the potential for the UK to leave the EU without a deal.

Fianna Fáil Kildare South TD Fiona O’Loughlin opened the ardfheis, chairing the debate on crime and said the focus should be on “safe communities”.

The party’s justice spokesman Jim O’Callaghan described Fine Gael’s handling of justice over the past eight years in office as one of “mismanagement”.

He said he wanted the Government to ensure that Community policing would be at the heart of the policing plan for the next 10 to 15 years.

He said the serious gangland feud in Dublin meant that resources had to be diverted from the rest of the country.

And he stressed that society had to be much more intolerant of gratuitous assaults, particularly on young men.

Statistics say that significant numbers of people involved in burglary or aggravated burglary are recidivists, he said.

He highlighted the party’s legislation to reform bail laws.

“We believe there should be a presumption that if you have been convicted of serious crime in the previous five years of serious offence and if you are charged with another serious offence, that you should not get bail.”

The numbers of people dying from drug related deaths is five times the number of deaths in road traffic incidents.

“There were 181 public order incidents in 2018, that’s a 37 per cent increase,” she said. There was a 50 per cent increase in robbery with one in five offences related to mobile phone theft.

“Low level anti-social behaviour has such a corrosive effect” that could damage communities permanently, she said.