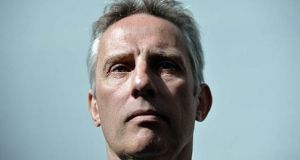 DUP MP Ian Paisley: the Irish Government “must wake up to the reality” that the withdrawal agreement must be renegotiated. Photograph: Getty Images

DUP MP Ian Paisley has insisted the current backstop or any reversion to the proposal where Northern Ireland would remain under the EU’s customs union and regulatory regime would be totally unacceptable to his party.

Mr Paisley was dismissive of any suggestion that the British government might acquiesce to a backstop that applied to Northern Ireland rather than the UK as a whole.

“It would not be a runner,” said Mr Paisley. The DUP could not accept any proposal that “partitioned Northern Ireland off from the rest of the United Kingdom”.

Tánaiste Simon Coveney said on Friday that in the event of a hard Brexit the Government would seek to avoid a hard Irish Border by insisting the UK government honour a December 2017 commitment for North-South “regulatory alignment if no other mechanism works”.

This solution, essentially a type of backstop applying specifically to Northern Ireland rather than to the whole of the UK – the option in the withdrawal agreement – was rejected by pro-Brexit Tory MPs and the DUP at the time.

Mr Paisley said on Friday that the Irish Government “must wake up to the reality” that the withdrawal agreement must be renegotiated.

“The agreement has gone. In the words of John Cleese, it is a parrot and it has deceased. Even Jeremy Corbyn has ruled that out, that there can be no division between any part of the United Kingdom. He is taking the same line as Theresa May, no red line down the Irish Sea essentially.

“The United Kingdom has voted to leave, and, secondly, parliament has not approved the prime minister’s withdrawal agreement, and therefore there is no agreement and effectively there is no backstop,” said Mr Paisley.

“It would be in everyone’s interest to negotiate and get a solution to this problem, and not just hanker after something that has been lost.”

Late in the day

Meanwhile, Fianna Fáil leader Micheál Martin said the real risk of a chaotic no-deal Brexit was now “beginning to dawn” on the Government.

“I think it’s begun to dawn that the prospect of a no deal is a very real one, a bit late in the day,” Mr Martin said.

“The Government had a view for quite a long time that we wouldn’t be where we are now. I think the Government perhaps thought that they’d have a deal earlier. I think they thought it’d be locked up before Christmas in the autumn period.”

Mr Martin said the threat of a no-deal Brexit, bringing with it trade disruption, would be “Armageddon” for the Irish beef and agricultural industry.

He said “there’s a lot of hot air out there from some quarters about preparing for Brexit, and being ready for Brexit” from parties such as Sinn Féin. However, calls from the same parties for Fianna Fáil to collapse the confidence and supply arrangement with the Government would create a “chaotic” political situation.