Former Rose of Tralee to run for Fine Gael in Europe 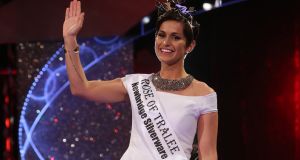 A former winner of the Rose of Tralee has been selected by Fine Gael to contest the European Parliament election in May.

As expected, 2014 Rose Maria Walsh’s candidacy was ratified at the party’s selection convention for the Midlands/North West constituency that was held in Mullingar on Friday night.

Speaking after her selection was confirmed, Ms Walsh (31) said she was delighted to be Fine Gael’s youngest candidate in the European elections.

Ms Walsh was born in Boston and moved with her Irish-born parents to the village of Shrule on the Mayo-Galway border when she was seven years old.

The self-employed media and event consultant and LGBT rights activist said that she was one of “many young people who represent the face of the new Ireland: an Ireland which is diverse and tolerant but continues to embrace the traditional values of love of family and community, hard work and sense of place”.