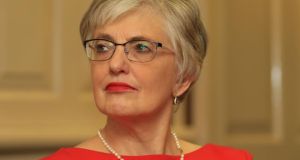 Minister for Children Katherine Zappone: ‘We want to find ways of reparation and healing alongside the brilliant work being done by the commission.’ Photograph: Nick Bradshaw

Minister for Children Katherine Zappone has cautioned that DNA sampling of bone material found at a former mother-and-baby home in Tuam, Co Galway, might destroy the remains of children and preclude a dignified reburial.

Groups representing former residents and relatives have called for DNA testing to help identify remains. However, Ms Zappone said while this was not “necessarily impossible”, the recent report published by an expert group had pointed to major technical challenges, as well as cost issues.

The expert group reported to Cabinet earlier this month that it would be very difficult to identify individual children through DNA sampling. They pointed to difficulties around co-mingled remains, as well as the need to take samples from living human relatives.

The report also said best samples for DNA purposes were from teeth, which were not sufficiently developed in children under two years of age. The issue of cost was also raised.

Ms Zappone said: “I’m not saying that money is not important but it is one factor among several in relation to this.”

She pointed to the need for samples from living relatives as well as difficulties collecting samples from the remains of children under two years of age.

She then pointed to another factor: “Thirdly, oftentimes in the circumstances where juvenile remains are being tested, in the effort to [get] the DNA sampling it destroys the remains …

“People who want to know is it their brother or sister, but would also love to exhume and rebury the remains with the dignity and respect that the child deserves, those are the kind of things they are going to be faced with,” she said.

“Another point in the process is because of where they are and how they were put there, some of the remains are co-mingled.”

Ms Zappone said she hoped a member of the expert group, led by forensic archaeologist Niamh McCullough, and an independent facilitator could be made available when Galway County Council begins consultation with the relatives on these issues in January.

“I think it would be very helpful for a member of the team to spend some time with the families to help them to understand the detail of the technical stuff that has been found.

“I found in my conversations with them I came to a deeper understanding of what was possible and not possible,” she said.

However, Ms Zappone said ultimately she would listen to the views of the relatives.

“It is one of the most important aspects of my ministry. I have been determined to lead the way in terms of the Government responding in a respectful way to the people affected.

“We want to find ways of reparation and healing alongside the brilliant work being done by the commission.

“The commission was established to ... look at burial practices and to create a social history around what was a horrific time for many women and and to look at ways they were put away and treated by Irish society.”

Seamus Mallon funeral: ‘Farewell to a great chieftain of Irish political life’ 21:11
Woman charged over Gorey stabbing told gardaí she ‘didn’t mean for him to die’ 20:49
Opposition parties criticise under-funding of national maternity strategy 20:48
NUIG researchers call on election candidates to lay out direct provision plans 20:45
Gardaí may have to wait days to interview mother of McGinley children 20:26
SUBSCRIBER ONLY