Number of Irish citizens dying abroad rises by 21% in 2017

More than 2,500 Irish needed help, some caught up in terrorist attacks and natural disasters 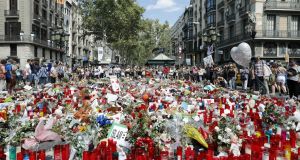 The Department of Foreign Affairs provided support to Irish people caught up in terrorist attacks in Barcelona (above), Manchester, London and St Petersburg, the earthquake in Mexico City and Hurricane Irma in the Caribbean. Photograph: Andreu Dalmau/EPA

The Department of Foreign Affairs provided support to over 2,500 Irish citizens who got into difficulties abroad during the year, according to figures released on Wednesday.

“Statistics show more Irish people are travelling overseas than ever before, and this presents fresh challenges for my department and our embassy network in ensuring we continue to provide a world-class service for our people across the globe,’’ Mr Coveney said.

More than 300 families needed help following the deaths of loved ones abroad, the highest number the department has dealt with in a single year.

Support was provided for Irish people caught up in overseas terrorist attacks in Manchester, Barcelona, London and St Petersburg, as well as natural disasters such as the earthquake in Mexico City and Hurricane Irma in the Caribbean.

Mr Coveney urged people to be vigilant, and cautious about their personal safety, when travelling abroad, given the increase in global terrorism and climate-related threats.

He said people should consult the department’s travel advice in advance of their trip and be mindful of their surroundings while travelling.

FF spoke to Waterford candidate over issues around liquidated company 21:47
Man jailed for welfare fraud admits to further €18,000 false claim in benefit 21:15
Fine Gael says it will roll out free GP care to everyone under age of 18 by 2025 20:59
PSNI’s Deputy Chief Constable set to retire at end of month 20:50
New code to cap salaries of special advisers to North’s Ministers 20:39
SUBSCRIBER ONLY