Department of Justice to be split into policing and security 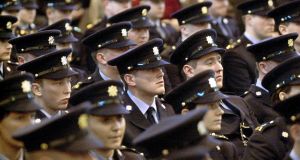 The Taoiseach said “creating a whole new agency and disentangling it from the Garda and Defence Forces would be complicated”. Photograph: Alan Betson/The Irish Times

The Department of Justice is to be divided in two but will remain under one minister, according to Taoiseach Leo Varadkar.

Following a series of controversies including the resignation of tánaiste Frances Fitzgerald over the department’s dealings with Garda whistleblower Sgt Maurice McCabe, Mr Varadkar has said the department would be divided internally next year into policing and security wings.

“It is our intention to proceed with that reform in 2018, having a new secretary general, and two deputy secretary generals over the two new sections of the department,” he told journalists.

The department is currently without a permanent secretary general following the unexpected early retirement in November of Noel Waters who was formally appointed in October 2016. He announced he would depart immediately the day of Ms Fitzgerald’s resignation, having succeeded former secretary general Brian Purcell who resigned in 2014 over the McCabe crisis.

Mr Varadkar said that “in relation to the Department of Justice, I can’t not have concerns given all that has happened in the past couple of years”.

He stressed: “I want to be clear however, that I absolutely acknowledge there are lots of really good people working in the Department of Justice. I would just mention the Domestic Violence Bill and the enormous good work that has gone into that.”

He said reform was ongoing and “when you are reforming something, part of the process is people lifting up mats and looking under rugs and sometimes you see things you don’t want to see and you have to deal with them and we are going to deal with them”.

The Toland group, appointed by then minister for justice Frances Fitzgerald in 2014, recommended radical reform of the department to ensure greater transparency and openness.

Mr Toland had not recommended separating justice into two departments but the Taoiseach said “you could go one further and split it into two fully separate departments at a later date”.

He pointed out, however, that “we have the slight complication in Ireland that we have a Constitution which only allows us have 15 senior Cabinet ministers.

“So every time you create a new government department you have to abolish one and I am not yet sure which department people would axe as they all do very important work.”

Labour leader Brendan Howlin had called in the Dáil for the establishment of a “bespoke security agency which would separate security considerations from An Garda Síochána, leaving the Garda as a policing organisation”.

The Taoiseach told him that “creating a whole new agency and disentangling it from the Garda and Defence Forces would be complicated”.