Brexit deal: Main points from agreement between UK and EU

At an early morning press conference in Dublin Taoiseach Leo Varadkar oulines the achievements of the Irish Government in phase one of the Brexit negotiations. Video: Bryan O'Brien 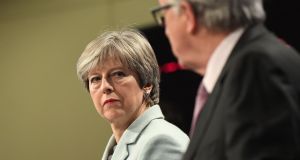 Theresa May and Jean-Claude Juncker address a press conference at the European Commission in Brussels on December 8th, 2017. Photograph: Emmanuel Dunand/AFP/Getty Images

The European Commission is to recommend to EU leaders that Brexit talks with the UK move on to the second phase after it deemed “sufficient progress” had been made, including a deal aimed at preventing a hard border in Ireland.

Below are the main points of the new agreement.

- The agreement promises to ensure there will be no hard border - including any physical infrastructure or related checks and controls - and to uphold the Belfast Agreement in all its parts.

- It makes clear the whole of the UK, including Northern Ireland, will be leaving the customs union.

- It leaves unclear how an open border will be achieved but says in the absence of a later agreement, the UK will ensure “full alignment” with the rules of the customs union and single market that uphold the Belfast Agreement.

- However, the concession secured by the DUP is that no new regulatory barriers will be allowed between Northern Ireland and the rest of the UK without the permission of Stormont in the interest of upholding the Belfast Agreement.

- EU citizens in the UK and UK citizens in the rest of the EU have the right to stay. Rights of their children and those of partners in existing “durable relationships” are also guaranteed.

- UK courts will preside over enforcing rights over EU citizens in Britain but can refer unclear cases to the European court of justice for eight years after withdrawal.

- There is no figure on how much the UK is expected to pay, but the document sets out how the bill will be calculated – expected to be about £50 billion.

- It also agrees to pay its liabilities such as pension contributions.

- The two sides agreed there would be need for co-operation on nuclear regulation and police and security issues.

- There was an agreement to ensure continued availability of products on the market before withdrawal and to minimise disruption for businesses and consumers. – Guardian