Big Brexit fudge has not removed risk of catastrophic outcome

Chris Johns: Ireland needs an insurance policy, and the Apple cash would do for starters 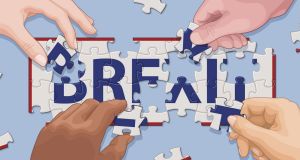 Ireland needs an insurance policy. The big Brexit fudge has not removed the risk of a catastrophic outcome. The economy will take a Brexit-related hit; the only question is how big.

A new related risk has suddenly popped up – only on the far horizon but big enough to start thinking about. The union that is the United Kingdom is as shaky as it has been in modern history. Perhaps ever.

Maps of the UK have been flying around Twitter with hard borders drawn between those Remain areas wanting “alignment” and those Leave regions that do not.

Attempts to appease Britain’s noisy neighbours have merely focused attention on Northern unionists. Lots of factors contributed to the DUP’s desire to do a deal last week, not least the leadership of the UK’s government-in-waiting: Jeremy Corbyn has a long history of friendship with Sinn Féin.

Views on women’s rights, creationism, climate-change denial and time zone have all piqued the interest of many in the UK. But it’s money that has attracted the most attention. And given rise to some very good questions.

Given how much English taxpayer cash is absorbed by a pretty misaligned Northern Ireland, why did they make such a fuss? What do they want? Who are they?

Chancellor Philip Hammond found £1 billion to buy the DUP’s support after last summer’s election. Some Conservative MPs were heard last week cynically asking how much more might be needed to secure agreement in Brussels. In the end extra cash wasn’t required – yet.

But the British taxpayer has been made very aware that it’s not just about £1 billion. There’s the £10 billion bunged the North’s way each and every year. That’s a lot of British schools and hospitals not being built.

There is an implicit bargain between the richer and poorer parts of the UK that one helps the other. One of the contractual clauses is that the recipients of this largesse don’t cause trouble. It was instructive to observe English attitudes towards Scotland harden considerably during the latter’s independence referendum campaign. The beast of English nationalism was fed plenty of red meat.

By contrast, the money channelled into Wales is rarely questioned. The Welsh know which side of their cake is buttered.

Whether or not the English are getting anything worth having from their annual £10 billion sub to the North is a question now being asked.

Under the terms of the Good Friday Agreement it will not be the English who decide any change in the status of the North. That’s a matter for both parts of this island. We now have the tentative suggestion that a significant number of Northerners, perhaps even a majority of them, think they might be better off in the EU, maybe even in a united Ireland.

If you are unloved by your paymasters and there is a better economic future elsewhere, cold logic suggests at least a rethink.

Nobody expected the political earthquakes of Brexit or Trump. Irish unity is not such a fanciful idea any more; it wouldn’t be such a shock or even as daft an idea as Brexit.

So I have a suggestion for the Government. The time has come to drop its objections to the EU’s ruling that Apple pay us €13 billion in back taxes. Don’t open that escrow account. Ring-fence and invest it wisely instead. Call it the Brexit emergency fund.

We need all the friends in Europe we can get, and deciding to take the money will only gain us plaudits across the Continent. Even Apple– and all those other multinationals – know which way the global corporation tax winds are blowing. They are going to have to pay more – in Europe at least. They will moan but I suspect it won’t amount to much. Modern corporations are nothing if not pragmatic.

In any event, by some calculations Trump has just gifted a tax break to Apple worth perhaps three times as much as the EU says it owes the Irish taxpayer. We are talking chump change here.

That €13 billion could be a down-payment on that insurance policy. And, yes, it is a fanciful idea. But such ideas are needed because we need new thinking. One way or another we need insurance for those SMEs and farmers that could be hit by Brexit. Insurance against the possibility that unification, with all of its associated financial burden, is out there.

That €13 billion might not be enough. But as we approach budget surpluses and the economy continues to power ahead, now is the time to begin building a war chest for darker times.

Even if hard Brexit and unity don’t come to pass, at least there will be some money for the next recession: one thing that is certain to happen.