Journey times ‘will continue to get worse’ without BusConnects 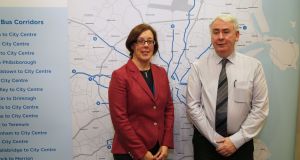 If Dublin is to maintain its capacity as a city and a capital “we will have to do more and urgently”, the National Transport Authority (NTA) is to tell an Oireachtas committee.

Anne Graham, chief executive of the NTA and Hugh Creegan, deputy chief executive are due to appear before the Oireachtas transport committee on Wednesday to discuss the BusConnects Core Bus Corridor Project.

Ms Graham will say that in the absence of BusConnects, “journey times will continue to get worse and commuters will spend more time travelling to and from work each day”.

In her opening address to the committee, Ms Graham will say the BusConnects proposals will make commutes shorter and more reliable and will “therefore make Dublin a more attractive location for employers”.

“A well-functioning public transport system is a basic requirement for any metropolitan area that aspires to providing plenty of good employment opportunities for its people into the future,” her opening statement says.

“With bus, rail, and trams, Dublin boasts some really great services but if we are to maintain our capacity as a city, a region and a capital, to continue to attract the best jobs and the best employers, we will have to do more, and urgently.”

Ms Graham is also due to tell the committee that there are a “number of challenges” the NTA faces in trying to implement the 16 bus corridors.

“Difficult decisions will have to be made and some locations will require more changes than others.” She is then expected to outline the impact on traffic movement, the acquisition of parts of front gardens, the reduction of on-street parking and the removal of trees.

Some 345 property owners have been informed they are set to lose part of their front gardens under the project along four of the corridors; Clongriffin (120 properties), Swords (110), Blanchardstown (100) and Lucan (15) to the city centre.

A further 1,000 property owners are expected to be notified from January and February in relation to the 12 other corridors.

These include Liffey Valley, Greenhills, Kimmage, Rathfarnham, Ballymun, Bray, UCD to Ballsbridge and Ringsend to the city centre as well as Clondalkin to Drimnagh, Tallaght to Terenure, Finglas to Phibsborough and Blackrock to Merrion.

Fine Gael TD Noel Rock, who is a member of the transport committee, said about 500 people have attended public meetings in relation to the bus corridors in Santry, Beaumont, Glasnevin and Finglas in recent weeks.

“The particular concern that I will be highlighting is the main road through Santry, the Swords Road, which they [the NTA] want to make a one-way road for cars, that’s a big concern for everybody that lives around there. It’s just not a realistic proposal,” the Dublin North-West TD told The Irish Times.

Mr Rock said there are “positives” within the BusConnects plan and added “there are compromises to be found”.

Election 2020: ‘We all think the health service is a lost cause’ 12:26
Clothing and footwear seized in Cameron Blair murder inquiry 12:16
Election 2020 outtakes: Vintage van and limo prove a stretch 12:14
Fianna Fáil’s pitch on health is strong on diagnosis yet less so on cure 12:03
Gardaí suspect botched murder attempt was bid to avenge Mulready-Woods death 11:56
SUBSCRIBER ONLY