Maternity hospital governance ‘will be resolved when it’s resolved’ – Taoiseach

Varadkar says law enacted by Oireachtas will apply, ‘not Canon or any other law’ 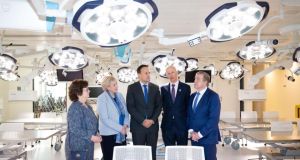 Taoiseach Leo Varadkar (centre) is pictured during a visit to the RCSI in Dublin. Photograph: Tom Honan/The Irish Times

The controversy over the governance and ownership of the new national maternity hospital when it moves from Dublin’s Holles Street to a site at the St Vincent’s hospital campus “will be resolved when it is resolved”, the Taoiseach has said.

Leo Varadkar told the Dáil that Minister for Health Simon Harris was still engaging with the existing National Maternity Hospital at Holles Street and the St Vincent’s Hospital Group to get it right “but we are confident that we can get there”.

Separately the Department of Health confirmed on Tuesday that the Health Service Executive had submitted a commencement notice to Dublin City Council indicating that work was about to get underway on the site earmarked for the new maternity facility on the campus of St Vincent’s University Hospital in south Dublin.

It suggested that the move was aimed at allowing construction to begin ahead of the introduction of new European building rules in January.

The development was highlighted in the Dáil by Social Democrats TD Róisín Shortall who expressed concern that the HSE had lodged a commencement notice when the Government “is not anywhere close to being in a position to sign a contract for work to begin”.

Mr Varadkar said he had no involvement in contractual matters but he believed “it relates to the enabling works rather than the main contract”.

The Department of Health said in order to ensure the development of the new national maternity hospital did not fall within the scope of the new building regulations, permanent works associated with the new hospital must commence on site before December 31st, 2018.

“To this end, a package of permanent works has been identified which can be undertaken under the Single Operator Framework already in place. It is understood that the HSE recently submitted a commencement notice to Dublin City Council indicating that work is about to commence on site. The act of submitting such a commencement notice does not place any legal obligation to commence the works to which it relates. However, if a notice is not submitted, and works do not commence, the provisions of Nearly Zero Energy Buildings [the new EU building standard] will definitely apply and this will have a significant impact on the building design,” the department said.

The Taoiseach also insisted in the Dáil that when the hospital was up and running “the laws that will apply are the laws enacted in this Oireachtas not canon law or any other law.

“The ethics that will apply are the medial ethics as laid out by the Medical Council, not anyone else’s ethical framework.” And he said the laws around conscientious objection that would apply would be “the exact same in every hospital”.

Mr Varadkar stressed the Government’s intention to own the hospital and that any procedure that was legal in the State including tubal ligation, abortion and IVF, will be available”.

He also said the project was on track and had planning permission, and that construction scheduled to start this week on the hospital related to enabling works around the car park and the pharmacy and not the main contract.

Fianna Fáil leader Micheál Martin said that since the announcement of the new hospital there had been “nothing but controversy and little progress on the site itself”. He said he could not understand “why we are at the 11th hour on the corporate governance issues concerning the hospital, which seem to be impeding the rapid acceleration of the project”.

Mr Martin also warned of the danger that with a lay trusteeship “private concerns can enter into this realm over time and that the State needs to be very guarded in protecting the taxpayers’ investment”.

Mr Varadkar acknowledged his concerns about private interests but insisted that the entirety of the Government’s investment of hundreds of millions of euro of taxpayers’ money would be protected by the State and the hospital “won’t be gifted to anyone”.

Sinn Féin leader Mary Lou McDonald described as “alarming and extraordinary” comments by the Archbishop of Dublin that “citizens don’t have to obey laws that are contrary to their Catholic faith”.

She asked when would the issues around ownership, governance and public representation on the board be resolved.