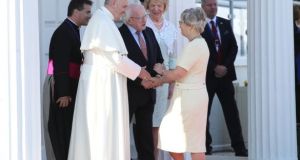 Pope Francis shaking hands with Minister for Children Katherine Zappone at Áras an Uachtaráin as part of his visit to Ireland in August. Photograph: Danny Lawson/PA Wire

Pope Francis has made no reference to a financial contribution by the Church in his response to a letter from Minister for Children Katherine Zappone about Mother and Baby Homes in Ireland.

He does however say he is praying that “efforts made” by the Government and the Catholic Church in Ireland will help “face responsibly this tragic chapter in Ireland’s history”.

Ms Zappone spoke to the pope when he visited Ireland in August and then wrote to him about the history of Mother and Baby Homes in Ireland, the high mortality rates and the burials of children on the grounds of the former home in Tuam, Co Galway.

She asked the pope that “the church will accept its responsibilities and make reparation for its party in a very shameful chapter of Irish history”.

In a short letter of reply to Ms Zappone, on Vatican-headed paper and dated November 13th, the pope said: “I wish to express my sincere appreciation for your recent letter in which you described the work of the Commission of Investigation concerning Mother and Baby Homes in Ireland.

“I wish also to assure you of my prayerful solidarity and concern for this sad situation, and I pray in particular that efforts made by the Government and by the local Churches and religious congregations will help face responsibly this tragic chapter in Ireland’s history.”

He concluded: “Gladly recalling my visit to Ireland and our conversation together I want you to know that I will pray for you, your loved ones and for your important work at the service of the youth of Ireland.”

Ms Zappone had said in her letter: “I believe the Church should contribute substantially to the cost of whatever option is decided by the Government. This should be done willingly, unconditionally and quickly.”

The Government has estimated the cost of excavating the Tuam site where up to 800 unidentified babies have been buried, at between €6 million and €13 million.

The Bon Secours Sisters, who ran the Tuam home, have offered €2.5 million towards the cost, which has been accepted in principle by the Government, although Ms Zappone said at the time that was a contribution to the costs. “It is voluntary, it is not a settlement, it is not an indemnity.”

A spokesman for the Minister said yesterday that Ms Zappone was happy to receive the papal letter.

“She thinks it is possible because of his reference to the congregations that the pope is aware of the offer by the Bon Secours Sisters.

“Acknowledgement is important and this is evident in the letter.”

The spokesman added: “She believes that raising the issue of Tuam brought an awareness of what happened to the pope’s attention, and that he has thought about it. It is good that the leader of the Church is aware of and understands the role of the church. This is important in addressing our past.”