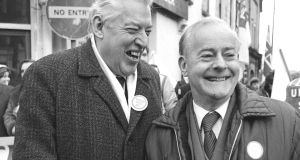 Unionist leaders the Rev Ian Paisley and James Molyneaux. They were described respectively as a “bigot” and “inconsiderable” by the Conservative Party’s Lord Hailsham. Photograph: Peter Thursfield 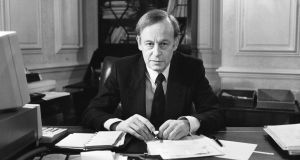 Noel Dorr: lord chancellor Viscount Hailsham admitted to him that while he had entertained initial doubts about the Anglo-Irish Agreement, he now believed it important that it “get around this corner – even on two wheels”. Photograph: Matt Kavanagh

During the negotiations which led to the historic Anglo-Irish Agreement signed by Garret FitzGerald and Margaret Thatcher at Hillsborough in November 1985, a battle had raged for the hearts and minds of MPs at Westminster. Many of the British politicians supporting the agreement saw it as a panacea, a new alignment of the Anglo-Irish relationship which would rid them of the distraction of Northern Ireland politics which they found boring, unpalatable and even dangerous.

They had been impressed by Irish optimism about the long-term hopes for the agreement, and were now disdainful and even bewildered by the wholly negative unionist response to it. The “Ulster Says No” campaign – which included boycotting the Westminster parliament – had proved counter-productive, and had allowed Irish nationalist arguments to win further traction.

A rather anodyne looking document, Our policy of persuasion at Westminster, from the Irish Embassy in London is to be found in the recent release of 1987 papers from the Taoiseach’s department. It may well have been written for the eyes of one man: Charles J Haughey as it was drafted just as Haughey assumed the duties of taoiseach.

Its author was Richard Ryan of the Irish Embassy in London, himself such an assiduous persuader of Conservative MPs that his colleagues mocked him as the man who “dined for Ireland”.

Ryan’s document outlined how in 1983 the FitzGerald-led government had decided to address the Northern Ireland issue “in a radical new way”. No longer would Irish diplomatic lobbying be confined to “Ireland’s friends”.

FitzGerald had decided that “a major ancillary arm of its policy” would be to press home on British politicians the need to understand the Northern Ireland problem from the Republic’s perspective and to emphasise “the need for radical remedial action”. They needed support for the then embryonic negotiation process with the aim of winning “a resounding – historic even – decision if and when the matter ever came before parliament in a vote”.

As the overwhelming Westminster endorsement for the agreement would show, this initiative had yielded spectacular results. But some of this support from MPs remained fickle, and was conditional on improved security from the Irish side.

Ryan wrote of “the widespread simplicity” of British opinion on “the entangled problem of Anglo-Irish relations”. Dublin could not be complacent about retaining the ground they had won. They were well placed, however, to continue their efforts. At Westminster, Irish Embassy personnel were by now “an accepted feature of the daily round”.

The unionists at Westminster had been resentful of this Irish Embassy success. Ian Gow – seen as a Thatcher protege – had sacrificed his own career by resigning from her government the moment she appended her signature at Hillsborough. He was now leading his own hearts and minds strategy aimed at toppling the agreement by recruiting supporters to his Friends of the Union lobby group.

Michael Lillis from his redoubt in Maryfield in Belfast – where he was embedded as the Irish government’s representative under the terms of the agreement – was also gleaning intelligence for Iveagh House. He could advise that Gow’s aim had been to recruit 20 supporters who would become 40, and then be doubled again to 80.

Ryan reported a lunch with Gow in February which had been their “frankest and fullest” conversation to date. Gow told of a meeting which the Friends of the Union had just had with Thatcher and [Tom] King. Not only had the Friends’ analysis been rebuffed, but they were then “very upset” to discover that, in a surprise NI Office press briefing, they had been “pretty well made out to be rats”.

Ryan reported Gow as feeling “out in the cold”. He believed that he had “made a bit of an eejit of himself”, and was rueful about what he reckoned was the hopeless strategy of unionist abstention from Westminster. He complained to Ryan “that they had seen their moors ‘shot over by the Irish guns’.”

Gow, an MP and solicitor, was assassinated by the IRA in 1990.

Ryan could also report during the British general election that attorney general Michael Havers had confided to him the Conservative Party’s strategy. If late in the campaign their margin of victory looked in any doubt, they would warn against the dangers of a hung parliament, and specifically against any government dependent on unionist support.

What is manifest in these files is the care with which diplomats on both sides were working to maintain in place the key architects of the Hillsborough agreement. A telling example is the suggestion by Dorr when meeting Thatcher that it would be worthwhile to maintain the “good channels of communication” which had been developed between the respective cabinet secretaries Sir Robert Armstrong and Dermot Nally.

Thatcher – who nursed suspicions that Armstrong had oversold the agreement to her – considered the point for a moment, and said “I expect that would be a good idea”.

This endorsement obviously pleased Armstrong, who took particular note of it when reading the British account of Dorr’s visit to Downing Street. Armstrong was jealous of his key role in Britain’s Irish policy.

He would also have regretted the loss of his key fellow strategist David Goodall, now appointed British high commissioner to India. Dorr reported that Goodall himself was somewhat “bemused” by his new assignment. And he reported him as keen “not to lose touch with Irish affairs”. He had expressed the hope that, “one way or another, he will be drawn back in due course into an issue which has absorbed so much of his attention and concern over the past few years”.

Ryan also brought reassuring intelligence to Dublin when he reported his lunch with John Boyd, Goodall’s successor. Boyd had read the minutes of the Dorr/Thatcher meeting and had characterised her inevitable emphasis on security as an indication of a “bee in her bonnet”. His own impression from visiting Northern Ireland was of a “distinct feeling” that security co-operation was “very good and improving continually”.

He admitted that there was “a wide spectrum in the NIO as regards both quality and attitude to the agreement”. But he and Armstrong intended to keep “a firm and direct overview role on the agreement”. Moreover they intended that “no one in the NIO who matters will be left in any doubt about that”.

Briefed about Ryan’s work in lobbying Conservative MPs, Boyd adjudged it “necessary and important”. He then added his sympathy to Ryan, as he himself would “rather sup with the devil than some of the ‘Roy Bean’-type figures on the right wing of the Conservative Party”.

Ryan himself had insisted that Conservative understanding of Dublin’s position remained fragile, and would need constant bolstering. Irish officials must look out for “detectable whiffs of dissatisfaction about the agreement at government level”, and should remember that it was “in our strong interest” to prevent that spreading to the backbenches.

He also reminded Dublin that Ireland was no longer “a burning issue” in British politics, and that it would be the unionists who would benefit from the “extraordinary empathy at Westminster for the underdog” once they resumed their seats after the election.

Dorr’s reports from his round of farewell calls also gleaned some longer-term perspectives from senior British politicians. The leader of the House of Lords – and first ever Northern Ireland secretary – William Whitelaw confided to him that looking to the long term it had always been his belief that if one could get powersharing “really going” in the North, the importance of the Border would “fade away over fifty years or so. Then unity would be a real possibility.”

A “spry” lord chancellor, Viscount Hailsham, admitted to Dorr that although he had entertained initial doubts about the agreement when it was in gestation, he now believed it important that it “get around this corner – even on two wheels”.

Hailsham agreed that there were some problems in politics “where one should not look for a single big settlement but where one can do something to set things on the road to resolution”.

Dorr elicited a more detailed view from the attorney general Michael Havers at a conversation after dinner at Ryan’s house. Havers expressed a “willingness to see Northern Ireland as a historic legacy to both countries which must one day be addressed creatively and imaginatively”.

Dorr added that he thought such long-term thinking showed, on the part of Havers, “a measure of innocent optimism which may not be very realistic, and that it rests in part on such ideas as that ‘you in the South are such nice people (compared to the frightful unionists) and you speak English so much better than they do’!”

Ryan included Michael Shea, press secretary to the queen, among his contacts, reporting in January that “the monarch”, as he called her, was “very well-disposed” towards Ireland and very much in favour of the agreement. She entertained “no particular doubts” about her government’s Irish policy, and believed that it was “all going in the right direction”.

Ryan described Shea as “a very well-disposed fellow”, and added that the queen was also “a fan” of the taoiseach – and as he was reporting in January, the accolade was for FitzGerald not his successor.

Dr John Bowman is a broadcaster and historian, His latest book is Ireland: The Autobiography: One hundred years of Irish life, told by its people (Penguin).