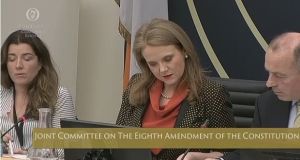 Senator Catherine Noone (Fine Gael) chairwoman of the Oireachtas Committee on the Eighth Amendment speaks to committee officials during its meeting on Wednesday. 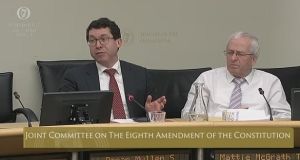 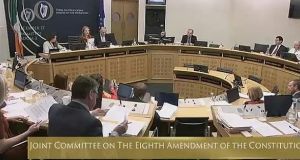 Members of the Oireachtas Committee on the Eighth Amendment at their meeting on Wednesday.

The Oireachtas committee on the Eighth Amendment has agreed to recommend a series of changes to abortion laws, including access to terminations without restriction up to 12 weeks.

After three months of evidence from experts, the committee proposed repealing Article 40.3.3 of the Constitution, which gives the unborn and the mother an equal right to life.

It agreed the Oireachtas should be allowed legislate for abortions and recommended it should provide for terminations up to 12 weeks without restriction.

The majority of the committee also supported abortions in the cases of rape, fatal foetal abnormalities and when a mother’s life or health is at risk.

A number of other motions were put before the committee but failed to receive the majority support.

Terminations up to 22 weeks was rejected, as was abortions in the case of a fetal abnormality that is not fatal and providing abortion on the grounds of socio-economic status.

A proposal by Independent TD Mattie McGrath to reverse the Protection of Life During Pregnancy Act, which allows for terminations on the basis of suicide, was also voted down by the committee.

The committee voted overwhelmingly in favour of decriminalising abortions in specific circumstances.

The recommendations will be included in a final report, which will be published on December 20th and sent to the Oireachtas for consideration.

On the individual proposals, 14 members of the committee voted to delete Article 40.3.3 of the Constitution, while six voted against it and chairwoman Catherine Noone abstained.

Fianna Fáil TDs James Browne and Anne Rabbitte said they would not be in a position to support repeal, but would favour replacement of Article 40.3.3 of the Constitution.

Both said they supported terminations in the cases of rape, fatal foetal abnormalities and when there are threats to a woman’s life or health.

However, they believed the right to the unborn should be retained in the Constitution.

Fine Gael TD Hildegarde Naughton also voted against repealing the Eighth Amendment outright, stressing legislation must be published in tandem with any deletion from the Constitution.

Ms Naughton told The Irish Times she is in favour of repeal but believes people should know what will occur after it is removed.

On the recommendation to allow for terminations up to 12 weeks without restriction, the vote was carried by 12 votes, five votes against and four abstentions.

Sinn Féin abstained in this instance as it goes beyond the party’s position on the Eighth Amendment.

However, the party’s health spokeswoman Louise O’Reilly said it would review its position on this matter, in light of the committee’s recommendations.

The committee was tasked with examining the report of the Citizen’s Assembly and preparing a report for the Oireachtas.

It made a number of ancillary recommendations including decriminalising abortion when a women procures or seeks to procure an abortion. When a termination is carried out in a hospital or licensed clinic by a qualified practitioner, the committee recommends no criminal sanction should apply.

There was also agreement to provide free contraception, improve sex education, provide for early scanning and testing and to provide education to reduce the number of unplanned and crisis pregnancies.