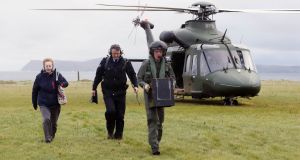 Ballot boxes from 12 offshore islands are being delivered to count centres on Friday after mixed turnout results for voting in the presidential election and blasphemy referendum.

Percentages ranged from 4 per cent to 50 per cent, with Mayo islanders appearing to be among the most engaged and Donegal voters least so.

The funeral of King of Tory Patsy Dan Rodgers may have influenced low voting on the northernmost Donegal island, at 14 per cent, while Mayo’s Inishturk reported a 50 per cent turnout.

Neighbouring Clare Island at the mouth of Mayo’s Clew Bay recorded a 46 per cent turnout, and presiding officer Padraic O’Malley said this was the lowest he could remember in any general election, presidential vote or referendum in the past two decades.

Four Galway islands –the three Aran islands and Inishbofin – averaged a 30 per cent turnout – but with two hours still to closing.

Presiding officers were anticipating a later surge after evening ferries, but reported very low numbers showing up to vote before morning ferries.

Only three of 63 registered voters on Donegal’s Inishbofin had exercised their ballot by time of closing, and there was 24 per cent turnout on Inishfree – as in one of four registered voters. On Gola, a total of eight of 29 registered names voted.

The larger of two polling stations on Donegal’s Arranmore recorded a 20 per cent turnout close to closing time.

Some 2,601 people were registered to vote this month on 19 offshore islands – 10 fewer than during the referendum on the Eighth Amendment. Some 12 of those off Mayo, Galway and Donegal cast their votes a day ahead of the rest of the State, with seven west Cork islands voting on Friday.

The earlier polling date has been a bone of contention for Comdháil Oileáín na hÉireann, the Irish Island Federation, which says all islands should vote with the mainland, given improved transport links.

Fianna Fáil spokesman on regional development, Gaeltacht and the islands Éamon Ó Cuív said he was confident that this week would mark the “last time” that islanders would not vote on the same day as the rest of the State.