Irish people most optimistic about future of European Union

Number of people across EU who consider themselves ‘European’ rapidly rising 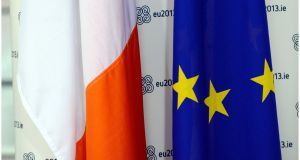 Irish people are the most optimistic about the future of the European Union, with more than three quarters confident the EU economy will continue to grow, according to a new report.

The results of the Eurobarometer study show more than two-thirds of Irish people also say the national economy is in a “good” position, while 73 per cent are happy with their job situation and 84 per cent are content with their household finances.

However, more than half of people surveyed in Ireland say they do not trust the Government.

The 2017 research also reveals 58 per cent of Irish people have a “positive” image of the EU, while 77 per cent say the impact of the economic crisis has reached its peak.

Less than half of other EU respondents agreed that the continent had made it through the worst of the crisis, with 40 per cent saying the job market will continue to suffer.

More than two thirds of Greek respondents and over half of those survey in Cyprus and the Czech Republic say they view the EU in a negative light.

However, the data shows Europeans are becoming more optimistic about their national economies and support for the euro is at its highest since 2004.

In Ireland, respondents said housing, health, social security and cost of living were the most important issues facing the nation. Meanwhile, worries about unemployment fell, with 17 per cent of people expressing unease about their job situation, compared to 24 per cent in autumn 2016.

Half of Irish people said housing was the biggest issue in the State, while less than 10 per cent of other Europeans considered housing important.

At EU level, unemployment is considered the most important national issue followed by immigration, health and social security. Less than 10 per cent of Irish people said they were worried about the effects of immigration on the State.

Terrorism was named the top issue facing the EU by Irish respondents, followed by immigration and the economic situation.

Nine out of 10 Irish people support free movement to work, live, study and do business in the EU, while 80 per cent support a common energy policy among EU member states. Ireland is also one of the biggest supporters of the euro currency, with 83 per cent in favour of the European economic and monetary union.

Large numbers of Irish respondents also support a common European policy on migration, a digital single market in the EU and a free trade and investment agreement between the EU and the United States.

Ireland is not the only nation feeling positive about the future of the EU. More than half of French people expressed confidence in the union, a jump of 14 percentage points following the election of pro-EU president Emmanuel Macron in May 2017.

The Eurobarometer Spring study was carried out in May, with 33,180 people questioned across the EU, including 1,009 in Ireland.