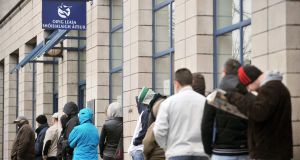 The Government has been warned by its own officials that across-the-board social welfare increases in the budget will be “very expensive”. Instead, it suggests increases should be targeted at specific groups, in a budget where room for manoeuvre is extremely limited.

The last budget introduced a weekly increase of €5 in all welfare rates, but officials in the Department of Social Protection say such a move may not be possible again.

The warning is contained in papers published by the Department of Finance’s tax strategy group, which says the Government could target the most vulnerable to help, such as those receiving the family income supplement.

Current estimates of the scope for new tax and spending measures are about €500 million, but this is likely to reduce further if the new public pay deal passes.

Senior officials in the tax strategy group examine various ways to raise new revenue as part of a reform of income tax and the universal social charge (USC). In a series of papers, released last night, they warn that continued reductions in the USC could, in isolation, lead to a narrowing of the tax base.

However, reducing the USC or improving social insurance for the self-employed could be paid for by PRSI increases.

Among the other options for raising revenue would be the gradual withdrawal of PAYE tax credits from higher earners, which would help to pay for reductions elsewhere. This would increase the marginal tax rate – the rate on every extra euro of income earned – to 60 per cent in some cases. The officials also warn that those on medical cards, who currently pay a reduced USC rate, will pay more next year unless the Government decides to extend this relief. Equalising taxes on petrol and diesel would also raise revenue.

The papers, which are published as part of the annual budgetary process, currently under way, warn of significant upheaval for Irish business if Britain crashes out of the EU without a deal on future trading arrangements.

“The impact on traders and hauliers would be huge,” it cautions, with the imposition of new tariffs and customs controls and particularly onerous regulations likely for the food sector.

Significant delays would be in prospect with the likelihood that all the new arrangements would not be in place by Britain’s exit in March 2019. After Brexit there was also the risk that Britain could cut taxes such as VAT or introduce new business incentives, creating competitive pressures for Ireland.

Elsewhere, the papers also suggest that landlords could see the acceleration of a planned restoration of their ability to write off mortgage payments, as well as possibly allowing them to write off property tax bills against rental profits.

The creation of tax incentives to encourage developers to build more social and affordable houses in certain areas is also proposed.

School closures over strike set to be greater than anticipated 01:00
Fianna Fáil candidate served as director despite court order 00:54
FG and FF back transition payment for persons retiring before to right to State pension 00:10
Lobby to press politicians over referendum on right to home 00:05
Irish Times poll: Large majority want change of government 23:33
SUBSCRIBER ONLY