Taoiseach says there would ‘potentially’ be a presidential election next year 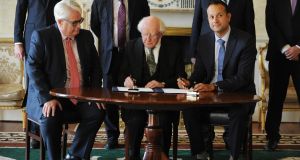 Taoiseach Leo Varadkar has said he is waiting to see if President Michael D Higgins renominates himself for the position before thinking about other candidates.

Mr Varadkar said there would “potentially” be a presidential election next year, when Mr Higgins’s seven-year term ends.

But asked whether Fine Gael would consider nominating former taoiseach Enda Kenny for president, he said: “The most important aspect of that, the thing we don’t know yet, is whether President Higgins is going to renominate himself.

“A sitting president is independent and has the authority under the constitution to nominate himself for re-election. I think he has done a fabulous job as president.”

Mr Varadkar said he “really liked” working alongside Mr Higgins. “I really already lean on his advice and his experience. It is an advantage as a young Taoiseach to have an experienced president to bounce things off and consult with,” he said.

“So the first decision - before we even think about other candidates - is to see whether President Higgins nominates himself.”