Varadkar’s comments on Brexit are a sharp message to London 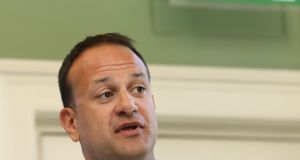 The Twitter bio of Taoiseach Leo Varadkar says, among other things, that he “has been known to talk too much”.

It’s one of the reasons why he has been popular with reporters as he rose through the political ranks.

He was certainly talking freely on Friday during his first round-table interview with political correspondents at Government Buildings.

Before taking questions from reporters, he delivered a brief speech outlining his views on the relationship between journalists and politicians, “by its very nature both symbiotic and oppositional”, but hopefully not “unhealthy, insidious or destructive in the way it is in some other countries”.

“We are all patriots and I think it’s better for our country and better for our politics if we each have the opportunity to do our jobs as best we can, and to feed off each other rather than feed on each other,” he said.

The first question on Brexit prompted a response that demonstrated a clear change of tone from the “softly softly” diplomatic approach adopted by his predecessor, and reminded the reporters of Varadkar’s previous habit of making headlines with forthright statements.

Asked about a London Times story that reported tensions between the British and Irish governments and a proposal from Dublin that the Border should effectively run down the Irish Sea, Varadkar let rip.

“As far as this Government is concerned there shouldn’t be an economic Border. We don’t want one. It’s the United Kingdom, it’s Britain that has decided to leave and if they want to put forward smart solutions, technological solutions for Borders of the future and all of that that’s up to them.

“We’re not going to be doing that work for them because we don’t think there should be an economic Border at all. That is our position,” Varadkar continued.

“So let them put forward their proposals as to how they think a Border should operate and then we’ll ask them if they really think this is such a good idea because I think it will have a very severe impact on their economy if they decide to go down that route.”

Varadkar’s rocket is the most forthright statement of the Irish Government’s position since the Brexit vote. It also marks a significant shift away from the essentially collaborative stance adopted by the Irish towards the British since the referendum. It will give relations between Dublin and London a jolt of the type not seen for many years.

But Varadkar’s intervention is only a public outburst of a private frustration with the British that has been growing in Irish Government circles since last year.

A combination of Westminster’s lack of clarity about what the UK wants from Brexit, as well as a growing trepidation in Dublin about the consequences of the hardening British stance on Brexit has led to the first cooling of relations between the two governments in decades.

And while relations between the two governments, both institutionally and personally, remain comparatively good, there is a growing chasm on Brexit.

Most people in the Irish Government believe that Ireland, North and South, is just not a priority for the UK. Looking at the behaviour of the British government since the referendum, it’s difficult to quibble with that judgment.

That, more than anything, is what Varadkar’s extraordinary intervention on Friday was about.

Senior officials denied that Varadkar’s comments represented a change of policy by the Government. But they conceded it signifies a change of mood. And there is no question that on Brexit, the mood has darkened.