‘Nobody wants a hard border. Nobody will accept it’ - Johnson

Speaking to RTÉ's Bryan Dobson at the Pendulum Summit Boris Johnson said that when he voted in favour of the Joint Report he believed the backstop was a 'convenient fiction'. 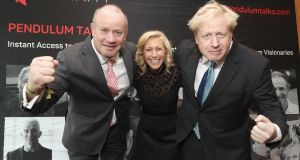 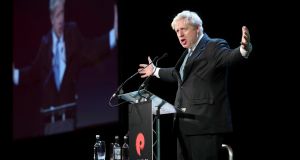 Boris Johnson, the Tory MP and prominent Brexiteer, speaking in Dublin on Thursday said he thought the initial backstop proposal was “a convenient fiction” said that “nobody wants a hard border. Nobody will accept it.”

Mr Johnson was speaking at at a business motivational conference in Dublin, as political turmoil over Brexit continues to rein in London.

Mr Johnson went on to say “”Nobody will implement it. We should not abandon attempts to find a technological solution to the Border without even trying.”

“Our two countries should be bold together. I know together we can organise it in the interests of business, ” he said.

When asked about his initial reaction to the backstop proposal on the Border Mr Johnson said: “I thought it was a form of words to be endured, a convenient fiction.”

Addressing the possibility of a no-deal Brexit, Mr Johnson said that he did not expect World Trade Organisation tariffs to be introduced. He said that there should be a “standstill” on tariffs between the EU and UK but that both sides would have to agree to the arrangement..

Mr Johnson, the former British foreign secretary who is also a critic of current efforts to avoid a hard Border in Ireland, addressed the Pendulum Summit, which is being held at the Convention Centre Dublin in the docklands.

The theme of the Pendulum conference is ‘Leading You to Greatness’’. Mr Johnson, the so-called “big beast” of Tory politics, who is credited with driving the Leave side to victory during the Brexit referendum campaign two-and-a-half years ago, is due give a presentation later in the afternoon on the theme of “opportunity in uncertainty”.

Meanwhile, Mr Johnson has been strongly criticised in Britain in recent days for suggesting that a chaotic, no-deal Brexit is the “closest” thing to what the British public voted for in 2016.

Mr Johnson’s handlers have so far shielded him from media questioning during his visit to Dublin, and he is believed to have asked that his conference presentation not be recorded. At lunchtime, however, the organisers of Pendulum, including former rugby star Frankie Sheahan, escorted the politician into a side room, where he posed for photographs and exchanged pleasantries with premium guests.

Diamond ticket holders at the event were invited to queue up for photographs with Mr Johnson, who greeted most of them individually with a brisk handshake and the same refrain: “Hello. I’m Boris. How do you do?”

Aside from briefly greeting the premium ticket holders, Mr Johnson made no other comments, and his office has not responded to any interview requests.

At pendulum, Mr Johnson is due to give a short speech, followed by an onstage question and answer session with RTÉ journalist Bryan Dobson.

9 Brother is dragging his heels as executor of uncle’s will - is there anything I can do?

10 Revenues almost doubled at Voxpro ahead of €150m sale