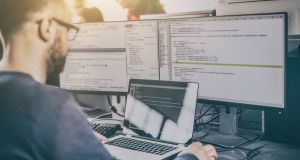 A tech developer with a successful London e-learning company has said he has already quit Britain after 10 high-flying years because of uncertainty and “mindless tribalism” caused by Brexit.

Jan, an IT specialist from the former Yugoslavia, has set up a new business in Switzerland where he says the approach could not be more welcoming.

He said the drop in the value of sterling “killed” his business. The cost of paying subcontractors in places such as Romania and India has shot up, destroying his margin.

He also felt unwanted after the referendum. So with a heavy heart he and his wife decided they did not “want to be trapped on an island that is descending into mindless tribalism” after 10 successful years there.

His story reflects the struggles of many small- to medium-sized businesses hit by the collapse of the pound after the referendum and its continuing weakness.

Jan, who did not want his real name used, managed to get well paid jobs in the capital and diverted some of his savings into a fund which eventually allowed him to set up his own business developing e-learning apps and games.

He won customers in the UK and a valuable client list in the US and collaborated with tech giants such as Apple.

“Our products were winning awards regularly every year,” he said. “Then Brexit happened and the currency dive took its toll on our business. We were working with subcontractors all over the world and big fluctuations in currency and general instability is devastating to business.”

So at 42 years of age he has moved his business to Switzerland, where he works with clients including an aerospace firm.

He decided to move despite the fact he was generating “new money” for the exchequer through foreign clients. “With a heavy heart, we cancelled our mortgage plans, moved the family, opening up a company in Switzerland and slowly drained the UK company, moving all the private savings, and started to learn German. It was difficult and felt useless, but we didn’t want to be trapped on an island that is descending into mindless tribalism,” he said.

How does he think he will fare?

Born and raised in communist Yugoslavia, he says he remembers well what he describes as “Serbian nationalism, exceptionalism and tribalism” after the death of Josip Tito, the dictator.

He moved to London in 2005 and says he “got a very good job in a prestigious digital media studio”.

“I then started my own business with lots of American clients and paid a lot . . . in taxes. Life was great.”

He says Switzerland’s welcoming approach to business is in stark contrast to the UK’s since the referendum. About 25 per cent of the population are foreign and all new immigrants are invited to a lounge party with the town’s mayor with free food and wine and a free city tour to help them get to know their new home.

“If immigration was the problem, Switzerland would be the poorest country on the planet,” he said. “Accountants tell me I am not the only one who has quit Britain and that they are swamped with small UK businesses setting up shop in Switzerland. The country is not in the EU but it couldn’t be more different than Britain post-2016.