Declaration system may be swamped, leaving trucks stranded, with risk of price hikes and shortages 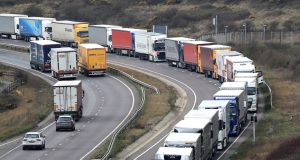 Trucking companies have raised concerns at the lack of a back-up plan if the IT system, that will begin processing paperwork, is overwhelmed by demand when it goes live. File photograph: Gareth Fuller/PA

Companies that move goods between Britain, Ireland and the European continent expect disruption to supply chains on January 1st that may cause shortages and ultimately price increases for consumers, irrespective of whether a deal can be reached in EU-UK talks or not.

A particular point of concern is the Goods Vehicle Movement Service or GVMS, the new British government IT system that will begin processing paperwork for goods movements from the new year. Companies have raised concerns at the lack of a back-up plan if the IT system is overwhelmed by demand when it goes live.

Another fear is that there are not enough trained customs agents in Britain to handle the sudden demand to process customs declarations, and that this bottleneck will lead to delays.

“The main concern is that declarations won’t be done in time and trailers and trucks will be stuck all over the place, causing serious problems in supply chains,” said Roy Denessen, a senior process engineer at Ewals Cargo Care in the Netherlands, which moves a wide range of goods in and out of Britain and Ireland including supplies for the car industry.

“We expect inefficiency and delays as a result. This concern is based on the lack of customs agent capacity on UK side.”

Haulage companies say the majority of their customers do not seem to be prepared for the change and, in many cases, do not realise they will have to make import and export declarations. Small and medium businesses, in particular, are struggling to dedicate the time and manpower investment required and are convinced there will be another last-minute postponement.

“Many people we are speaking to totally do not know how things work with customs formalities,” said Roel Janssen of VTS Transport & Logistics, a trucking company specialised in moving pharmaceuticals.

“This is a big change for a lot of companies, and we started asking our UK-based clients to change since July. I think Brexit is still not on the agenda of most of the companies, because from 125 clients, I think we have responses from 10.”

VTS is rerouting its supply chain via Dutch ports even if this adds extra cost and kilometres, because they offer a guaranteed departure time. They expect the Calais-Dover route to operate on a first-come-first served and to be congested.

There are also concerns about congestion in and out of Holyhead. Customs checks on lorries are to take place in Warrington for trade into Holyhead, meaning that trucks will have to drive the 173km to the English town irrespective of their ultimate destination, potentially adding hours to their journey and ultimately increasing the cost of goods.

There has been an increase in interest in direct shipping routes between Ireland and the continent, but many companies are waiting to see if the change is unavoidable. And, for some, the additional time required due to the less frequent sailings puts the option out of reach.

Transport companies report that businesses have been engaged in significant stockpiling ahead of the expected disruption to supplies, and that warehouse space is becoming more difficult to secure.

In recent briefings to the industry, the British government has been unable to give full details on how checks will work on goods entering Northern Ireland as talks are still ongoing, and businesses fear there is now not enough time to prepare.

“There’s no doubt it will be problematic at the start, the UK is not ready yet,” said Denessen of Ewals. “At the end of the day, such chaos, as we currently expect it, is going to cost people money. The risk exists that products won’t be available in supermarkets. UK citizens will then experience price increases, permanently, and unavailability, at least temporarily.”

A spokesman for the British government said it had invested in the customs intermediaries sector to recruit and train agents and improve hardware and software for businesses, and that GVMS is currently being tested.

“The delivery of border systems necessary for the end of the transition period is on track,” said the spokesman.