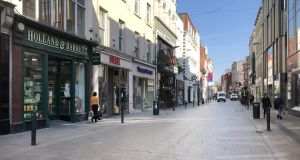 An almost empty Grafton Street in Dublin during the Covid-19 restrictions. Though no decisions have been taken yet, there is an expectation in and outside Government that a lot of retail businesses will be allowed to open up next week. Photograph: Bryan O’Brien

Have decisions on easing the lockdown made yet?

No. However, we got an idea of the thinking at Cabinet after Ministers held a discussion on lifting the Covid-19 restrictions at their weekly meeting. There was a briefing for Ministers and a discussion, with some Ministers arguing for as wide and early an opening as possible.

Later there was a Dáil debate where the party leaders set out their approach – summarised by Taoiseach Micheál Martin as “to go as far as possible” in the reopening, “but no further”. And there was an important meeting of the Cabinet’s Covid subcommittee where chief medical officer Tony Holohan and HSE chief Paul Reid were in attendance. But no final decisions will be made until later in the week.

When will we know what the plan is?

It’s likely to be Friday before the call is made on lifting the current restrictions and the plan for Christmas completed. Nphet normally meets on a Thursday, though has now been moved to Wednesday, when the public health experts will agree their advice to the Government on the reopening.

There is a busy Dáil schedule on Wednesday and Thursday with a series of votes likely, so the full Cabinet meeting to decide on the plan is unlikely to take place until Friday, though a crucial Cabinet subcommittee meeting is expected to take place on Thursday evening. The details of the reopening and the plan for Christmas will then be announced by the Taoiseach and Coalition party leaders on early Friday evening. It is not expected to interfere with the Late Late Toy Show, officials stress.

What are the key decisions to be made?

Ministers first have to decide what businesses should be allowed open next week and what restrictions should remain in place. It is expected that there will be a two-stage, and possibly three-stage, reopening – the first next week and others later in December.

And though no decisions have yet been taken, there is an expectation both inside and outside Government that a lot of retail businesses will be allowed to open up next week – all shops as well as personal services such as hairdressers, gyms, etc. But a big question mark surrounds the future for restaurants and pubs.

The hospitality industry has been lobbying furiously in recent days and weeks, but there remains significant resistance in Government to allowing pubs, especially so-called wet pubs which do not serve food, to reopen due to fears that people will flock to them over the Christmas and the infection rate will surge. Research conducted for the Department of the Taoiseach has underscored the significance of people mixing indoors where alcohol is being consumed as a source of infection.

And this is the great fear that Ministers have: that the reopening leads to an immediate surge in cases. If that happens from the start of December, the fact is that they could be faced with several hundred – or more – cases a week before Christmas, just when they were hoping to further relax the regulations on travel and home visits to facilitate family Christmases. That is the appalling vista for Government and the chief reason why a very cautious reopening next week is the most likely outcome. That’s not good news for pubs.

Won’t there be differences between the Government and Nphet?

Yes. There have been differences between the public health experts and Ministers for months, but they spilled out into public view prior to the start of the present lockdown and have continued behind the scenes since then. Both parties play their expected roles: the public health experts advise on the side of caution while the politicians – seeking to include the social and economic effects of a lockdown in their considerations – want to reopen society to a greater degree. There has been annoyance in Government circles at what insiders see as Nphet’s efforts to influence their decisions through their presence in the media, but ultimately the advisers advise and the politicians decide. This point has been explicitly made to the public health advisers in recent weeks. That means, of course, the responsibility for any decisions that ultimately turn out to be wrong rests with the politicians. This is something that has pushed them in a cautious direction in the past.

So what sort of Christmas is in store?

We’ll have to wait and see. It’s clear that we will move from Level 5 restrictions next week. Shops will reopen, but people will be urged to limit their social contacts in the hope of keeping the virus suppressed to enable a further reopening before Christmas. Travel from abroad will be heavily discouraged. A huge publicity campaign advising people to ration their social contacts to save Christmas is planned. The implicit warning will be that undisciplined behaviour in early December will have dire consequences later in the month. Doesn’t sound too Christmassy, does it?