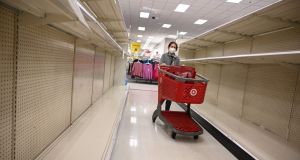 Fears of food shortages will result in panic buying in the North as there had been because of Covid, Doug Beattie told Stormont committee. Photograph: Robyn Beck/AFP via Getty

Northern Ireland faces “civil unrest” if panic breaks out over feared food shortages as a result of Brexit, a Stormont committee has heard.

“If there is a flood in England and a small town is cut off and foodstuffs don’t get into it, you don’t see that; the fact is people there are all in the supermarkets or the shops buying up everything on the shelves,” he told the committee.

“If that was to happen in Northern Ireland, if foodstuffs could not get in, if Asda was to withdraw and if Tesco was to say we can’t get food in, you would end up with the very same thing that we are seeing now with Covid, and that is panic buying.

The North’s First Minister Arlene Foster and Deputy First Minister Michelle O’Neill have told the European Commission there are “real threats” to food supplies because of strict rules on food imports into the single market.

While Britain will leave the single market at the end of the year, the North will remain in, meaning some food imports from Britain will need to be checked.

Major supermarkets and food suppliers have warned of a reduction in meat, fish and dairy products being sold because of the administrative expense involved.

Mr Beattie warned that an insistence on export health certificates for food coming into the North could reduce food supplies, particularly impacting on the lowest paid. The UUP MLA for Upper Bann said he wanted to see a contingency plan from Stormont that he could show his constituents to reassure them there would be no food scarcity.

“They haven’t been reassured on what we have done on Covid, and if they are not reassured on Covid I am concerned about them being reassured on Brexit,” he said.

Sinn Féin junior minister Declan Kearney, who was briefing the committee about negotiations ahead of the UK’s exit from the European Union within weeks, said there remains difficulties over “at risk goods” coming into the North.

It may well be the case that a “main deal” between Britain and the EU would have to be secured before there was a “pathway for compliance on food and meat issues”, he told the committee.

While Executive worries over the issue are being heard by some in London who are “receptive and understanding”, those concerns were “not then getting into the room” where negotiations are taking place, he added.

Mr Kearney said there may be a need to “escalate those concerns to a very high political level”.

The Executive was looking at a number of scenarios and there are “exercises taking place on worst case scenarios”, he added. He said the Executive is “committed and determined that these concerns that could become very febrile in the minds of the public are resolved to everyone’s satisfaction with as much reassurance as possible, but we are not there yet”.

Democratic Unionist Party junior minister Gordon Lyons said the power-sharing Executive is engaging with both the British government and the EU on “mitigation for issues such as food supply and food security to citizens.”