The Irish Government has confirmed that Santa Claus' Christmas travels qualify as essential under Covid regulations and that he will therefore be exempt from having to quarantine for 14 days upon his arrival in Ireland. Video: Oireachtas TV 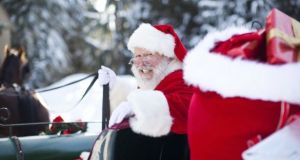 Minister for Foreign Affairs Simon Coveney has confirmed that Santa Claus will not have to restrict his movements as he is considered an essential worker and will move freely in Irish airspace this December.

He said Santa involved in “essential travel” but children should not stay up so as to ensure social distancing in maintained.

Mr Coveney said in the Dáil that Santa “is exempt from the need to self-quarantine for 14 days and should be able to come in and out of Irish airspace and homes without having to restrict his movements”.

He said: “We have been working on the Santa Claus issue for a number of weeks. It is important to point out to all children in the country that we regard the travels of Santa Claus as essential travel for essential purpose”.

But he stressed that “children should not stay up at night because he needs to socially distance. People need to keep at least 2 metres away at all stages to ensure they keep him and children safe.

“He is exempt and he is coming. He has confirmed that and appreciates the fact that Ireland has ensured that in a very different Christmas in 2020 the visit of Santa Claus will remain consistent.”

The Minister was responding to Sinn Féin TD John Brady who expressed concern that Covid restrictions might not be lifted for Santa.

“As many families across the country and thousands of young children are preparing to watch The Late Late Toy Show tomorrow, the big question on their minds is whether Covid restrictions will be lifted sufficiently to allow Santa Claus visit at Christmas.

“A representative from the North Pole has been in touch with me also to ask whether clearance will be given for Santa Claus to enter our airspace. This is an important question, that is “playing on the minds of hundreds of thousands of children across the country”.

Mr Coveney said Santa was an essential worker, and would move freely in and out of Irish airspace.