Ireland will be ‘top of list’ for EU Brexit fund 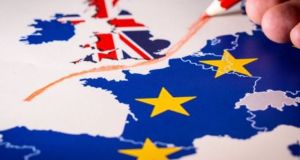 Ireland will be “top of the list” of beneficiaries from a multi-billion euro Brexit fund announced as part of a €1.8 trillion EU Covid recovery package, Minister of State for European Affairs Thomas Byrne has said.

The €5 billion Brexit Adjustment Reserve will offer funds to countries and sectors worst-hit by the effect of the United Kingdom’s departure from Europe.

It is part of the historic deal signed by all 27 EU member states on Tuesday to fund the next seven years of spending and to help struggling economies shoulder the burden of the Covid-19 pandemic and its economic fallout.

Food Drink Ireland (FDI), the representative group, welcomed the Brexit fund included in the deal noting that one third of the Irish agri-food sector, worth about €4.5 billion, goes to the UK market each year, as compared to less than 10 per cent from other EU countries.

“This highlights the unique circumstances faced by Irish industry and the need for these exceptional aid measures,” it said.

Mr Byrne told RTÉ radio’s Morning Ireland the package signalled the benefits of Ireland being part of a strong Europe.

The Covid Recovery Fund will be of significant importance to the economy and can be paid back over 30 years, he said.

Mr Byrne pointed out that it was the first time the United Kingdom was “not at the table” during European budget meetings and had changed the dynamic.

A Just Transition Fund will also be of benefit for Ireland, especially the Midlands, he added.

Mr Byrne said the July stimulus package will likely be discussed later today at the Cabinet meeting that was deferred when the Taoiseach was delayed in Brussels at the European budget meeting. Discussions will be ongoing and will reflect what was included in the European budget, he said.

Speaking on the Today with Sarah McInerney programme as reaction to the deal began to emerge on Tuesday, Fianna Fáil MEP Billy Kelleher said “the minutiae will still have to be addressed” but that it had been imperative the budget was agreed.

He said the Brexit fund was important as the UK departure would impact Ireland more than any other country.

However, despite the breakthrough there is some concern about what the deal might mean for Irish agriculture.

Sinn Féin’s spokesman for the sector, Matt Carthy, said clarity was needed on how much Ireland will contribute to the €1.8 trillion budget and how much it will receive.

He said the Common Agriculture Policy (Cap) had taken a “huge hit” – now lower than it had been in 2014 – and the Rural Development Fund had been halved.

“We need to cut through the spin and get to the heart of the deal,” he said on the same programme.

However, Mr Kelleher said he was confident the agricultural sector would be looked after and that each member state’s contribution will be determined by its economic performance.

Speaking earlier after the deal was agreed, Taoiseach Micheál Martin also moved to reassure the agricultural sector, saying “there is significant funding to protect the Common Agricultural Policy which has always been a significant factor in Ireland’s negotiations with Brussels.”

Elsewhere the Irish business lobby welcomed the breakthrough saying the country’s recovery from Covid will be shaped by the strength and stability of the wider European economy.

“It is particularly positive to note the commitment to support ambitious investment and research in digital and green transitions, which will present welcome opportunities for Ireland,” he said. “Such transitions are a central pillar of the Irish business community’s agenda.”

The kind of confidence referenced by Ibec was reflected in global markets – bolstered by a combination of the EU deal and encouraging advances in the search for a Covid vaccine. In the immediate aftermath the euro climbed to $1.1470, and the main European share indexes opened more than 1 per cent higher.