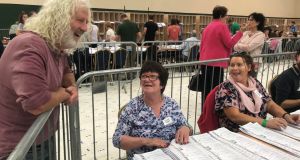 The Sinn Féin MEP was due to be eliminated and her votes distributed but, following her request to the returning officer, a full recount is getting under way on Thursday morning at Nemo Rangers GAA club in Co Cork.

Ms O’Sullivan said she understood the basis for the recount, noting “750,000 votes have been counted in the last few days. You can understand when it comes down to a full small hundred an error could be made.

“At this point in time I am the holder of the fifth seat. The Brexit seat. The seat of uncertainty. I hope to hold it. In the end, the voters have voted. It is what it is and I am big and strong enough to keep going.”

The distribution of Mr Kelleher’s surplus of 11,786 papers left Mr Wallace on 112,441 and Ms Clune on 101,012, both comfortably ahead of the Green Party and Sinn Féin challengers.

The order in which the seats are filled is important as the fifth seat in the constituency only comes into play once the UK leaves the European Union. If Ms Ní Riada is eliminated following the recount her distribution will determine the finishing order.

Mr Kelleher took the second seat having received a massive 38,767 transfers from his running mate, councillor Malcolm Byrne, in the 17th count.

Flanked by party leader Micheál Martin, Mr Kelleher said he was “elated, honoured and humbled” as well as “exceptionally relieved”.

“It is a wonderful feeling to be elected by friends, neighbours, people you know and people you don’t know across the constituency. It is a really humbling experience and an emotional one,” he said.

Ms Clune was thrown a lifeline in the 16th count when she received a massive 20,183 votes from the distribution of her Fine Gael running mate Andrew Doyle’s and Labour’s Sheila Nunan’s papers. This represented over a quarter of the available transfers. Ms Clune received just 64,605 first preference votes in the first count on Monday.

Sitting Fine Gael MEP and former GAA president Seán Kelly (FG) was the first to be elected in the constituency, describing his poll-topping performance as “probably the greatest moment of my political career”.

Mr Kelly received 119,444 first preference votes but had to wait24 hours to cross the finish line from the announcement of the first count results.

Fianna Fáil’s Brendan Smith was eliminated on the 12th count where he stood at 68,677 votes, 1,246 behind Mr Casey. On the previous count, the Green Party’s Saoirse McHugh was eliminated.

Speaking after his election in Midlands North West, Mr Flanagan said he believed his previous stint in Brussels convinced the public of his credentials.

He said the first two years in the European Parliament “I have to admit I was a little bit at sea, I found it very frustrating but in the last three years I really grew to understand it and I am able to communicate that message through social media to be able to explain to people exactly what I’m doing,” said the Independent MEP.

Ms Walsh, the 2014 Rose of Tralee, said her victory was partly down to “the huge amount of ground we covered as a team” during the campaign.

“I was fortunate that many of the towns and villages we visited over the last few weeks and months I had already visited as an international rose. So you’re just reintroducing yourself as a political representative.”

Mr Carthy dedicated his win to Sinn Féin party members and said he hoped some could take “solace” in his win after disappointing local elections. “Leonard Cohen once said there is a crack in everything before the light comes in,” the MEP remarked.