The Irish Times view on the Northern elections: the middle ground speaks out 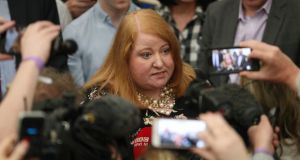 Alliance party leader Naomi Long’s election is highly significant for the welcome signal it sends that there is a moderate political centre in Northern Ireland capable of making its presence felt. Photograph: Liam McBurney/PA Wire

The election of Alliance Party leader Naomi Long to the European Parliament means that two of the three MEPs elected by the people of Northern Ireland are opposed to Brexit. This is in keeping with the clear majority who voted to remain in the EU in the 2016 referendum. Long’s election may be even more significant for the welcome signal it sends that there is a moderate political centre in Northern Ireland capable of making its presence felt.

One of the depressing features of Northern politics has been the persistence of tribal voting patterns in election after election. Long’s impressive first preference total put her in third place on the first count, not far behind the Democratic Unionist Party (DUP) and Sinn Féin. What was even more striking was that when all of the transfers were allocated, she had moved into second place ahead of Sinn Féin.

Although she was in third place going into the final count, the distribution of SDLP leader Colum Eastwood’s votes moved Long well ahead of Sinn Féin MEP Martina Anderson. Though evolutionary rather than revolutionary, this was a significant break with the traditional pattern of voting along traditional lines and it indicates there is an opportunity for the Alliance Party and the SDLP to work together to form a moderate bloc in Northern politics.

Between them the two parties won more than 32 per cent of the first preference vote compared to just over 22 per cent for Sinn Féin and just under 22 per cent for the DUP. It may be a sign that the divisive politics on which the DUP and Sinn Féin thrive could be losing its attraction for a significant number of people in the North who favour a shared future.

Polls have shown that a majority of people want an end to the political stalemate which has seen the powersharing institutions at Stormont remain in cold storage for more than two years. The election of Naomi Long is a clear reflection of that frustration and hopefully it will prompt a coming together of those who believe in compromise rather than confrontation.

There is also a message there for the Irish and British governments, who have too often appeared to be in thrall to the intransigence of the DUP and Sinn Féin. The manner in which the two governments abandoned the SDLP and the Ulster Unionist Party in the wake of the Belfast Agreement was one of the prime reasons for the success of more extreme parties.

On the European issue, the election of two MEPs opposed to Brexit shows the DUP is only speaking for a minority in its continued opposition to the reasonable compromise negotiated by Theresa May and its alliance with the most extreme elements of the Conservative Party. The people of the North have spoken again on this issue and their voice should be heeded.