Clare Daly says she will ‘rattle the cages’ in Europe

Fianna Fáil’s Barry Andrews takes fourth seat, saying he will ‘figure out what to do’ until Brexit 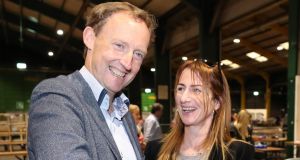 Ms Daly took the third seat with a final total of 87,770 votes, and Mr Andrews the fourth seat with 68,952. Outgoing Sinn Féin MEP Lynn Boylan was eliminated on the 15th count.

In a speech in the RDS after her election, Ms Daly said she was “gobsmacked” by the response she received “from every corner of this city”.

“I want to assure those people, many of whom are hurting and let badly down by our political system, that I intended to use the voice in Europe as I have used the voice in Dublin Fingal to be an advocate, a speaker-out for change and to rattle the cages of those in authority.”

She said her team had conducted their campaign on a “shoe-string budget, with a raggle-taggle mob of Independents 4 Change staff”.

She also paid tribute to Ms Boylan, describing her as “an exceptionally good MEP”.

“I’m very sorry to lose her. I’m very glad to see that transfers amongst the left carry through on this election, it is the way of the future. We will face that in a general election, which I hope will be very soon.”

She said she had a few candidates in mind to run for her seat when the byelection took place.

Mr Andrews, meanwhile, said it was satisfying to return a Fianna Fáil MEP to Dublin, and said he would consider what to do for the next few months until the UK left the EU.

“I see Brexit as a disaster for this island. You don’t have to study it to understand what a negative impact it will have. But if Brexit does happen I’m ready to serve in the European Parliament.”

He said he understood there were more than 50 MEPs across the EU in a similar situation to his in that his seat is in cold storage.

“I’ve got the fourth seat, so I don’t buy the narrative around being half-elected. On a personal level, I’ll figure out what to do in the meantime.”

Mr Andrews said there was confusion around how the electoral counts would work for those “cold-storage” seats, and said it was time for an electoral commission.

The count was suspended on Monday night following a row about the potential distribution of Ms Boylan’s votes after her elimination.

It was decided to distribute her votes instead of automatically electing the remaining two candidates Ms Daly and Mr Andrews.This was done in order to determine who would take the third seat and fourth seats.

This is important because the fourth seat is effectively in limbo due to the Brexit impasse, and the person who secured this seat would not able to take it until the UK leaves the EU.