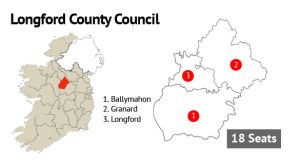 After four full days of counting, Longford County Council’s 18 seats were finally filled on Tuesday night – the last count centre in the country to declare results.

Fianna Fáíl’s Joe Flaherty was elected on Sunday in the Longford electoral area on the first count after securing 1,053 first preference votes.

In Ballymahon, which was the last of the 166 areas in the country to declare a first count, just two of the LEA’s six seats were filled before late on Tuesday evening – with Independent Mark Casey and Fine Gael’s Paul Ross both elected after the first count.

Following the eighth count only one other candidate had reached the quota of 949. However, as there are only five candidates vying it out for four remaining seats, one candidate was excluded with the lowest number of votes. The candidate excluded was Fianna Fáil’s Brigid Duffy.

This meant Fianna Fáil’s Mick Cahill, Fine Gael’s Gerard Farrell (FG), Colm Murray (FG) and Pat O’Toole all claimeded the four remaining seats and have been deemed elected, finally bringing the Longford local elections to a close – and, as it was the last to declare, the local elections nationwide too.