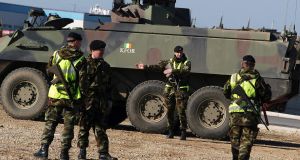 The Irish soldiers from the Kosovo Peacekeeping Forces (KFOR) patrol near the village of Lapusnik in on February 14th, 2008. Photograph: Armend Nimani/AFP/Getty Images

Ireland should consider joining a Defence Union of the EU, according to Fine Gael’s four Members of the European Parliament.

Brian Hayes, Mairead McGuinness, Deirdre Clune and Sean Kelly say also that Ireland should re-examine what is meant by neutrality and amend the so-called triple lock hurdle for Defence Forces’ deployment overseas by replacing the necessity for United Nations Security Council sanction with a Dáil vote supported by a two thirds majority.

Their proposals are outlined in a discussion paper, Ireland and the EU: defending our common European home, which they launched at the offices of the European Parliament in Dublin on Friday.

The four say it is time to “move beyond slogans and start to debate the real security needs of Ireland and those of the EU”. They say they do not support the creation of a European Army, which is not being proposed, but Ireland’s defence posture needs to be discussed in a way that is relevant to contemporary needs.

“Much of the debate in Ireland on this issue is characterised by outdated language,” they state.

Among the other measures they suggest is the creation of a central intelligence unit, to which both the Garda Síochána and the Defence Forces, both of whom have intelligence gathering capabilities but which are separate, would report. The unit itself would analyse data given to it, would share information with counterparts within the EU and report to government.

There should be a National Security Council to report and assess, twice a year, the level of security threat facing the country, the capacity to meet any such threat and specify the funding and resources needed to respond effectively.

There needed also to be a “cohesive national cyber security strategy”, State support for the development of Ireland’s defence industry and the post-Brexit implications for Ireland’s security and defence policy needed to be examined.

Mr Hayes said that if it was proposed that Ireland join an EU Defence Union which included within it a mutual assistance pact, such as applies between member states of the North Atlantic Treaty Organisation (Nato), Ireland should consider that.

“I’m not saying I am against that, no,” said Mr Hayes. “What I am saying is we would have to look at that on its merits. Were there to be a change on that, it would require a referendum.”

He was not sure people would pass any such referendum but the country “should have the confidence to at least look at it on its merits”. The problem with EU treaty referendums was that they became “a shouting match”.

“So the claim is, ‘there’s going to be conscription; our children are all going to be taken out of their beds and dragooned into this EU army’ and all the rest of it and no one is ever held accountable for the claims that they make. . . We need a public debate now about these questions. We need to hear the view of defence and security as part of our public conversations.”

On neutrality, the discussion paper notes that the policy, when formulated in relation to the second World War, was designed to avoid reopening wounds from the Civil War, which ended just 16 years before.

“The term ‘independent non-nuclear defence’ might be a better way of describing [Ireland’s] position,” says the paper. “in other words, a position on security and defence that is open to active engagement in international security operations but non-military aligned. Such a description does not imply any indifference to, or disengagement from, the pursuit of justice, human rights and the protection of vulnerable groups, which the term neutral may suggest.”

The need always for UN Security Council imprimatur when sending Defence Forces’ overseas in effect gave any one of the five permanent members (China, Russia, France, Britain and the United States) a veto over Irish policy, it suggests.

“Ireland has a proud record in peacekeeping and humanitarian missions,” says the paper. “Can we put at risk that hard-earned reputation to allow a permanent member of the UN Security Council to ultimately hold a veto over the decision of the Dáil and government in the deployment of Irish peacekeepers?”

On the issue of intelligence gathering and analysing, the paper argues that the new Cabinet Security Committee “should immediately develop a roadmap for the creation of a security and intelligence unit which could advise and report to government and interact actively with other European stakeholders and partners”.

“The State has essentially two intelligence-gathering agencies, and uniquely for a European country, there is no overarching body above them nor is there a senior government security adviser or office mandated with synthesising that intelligence into a comprehensive security analysis.”

More resources needed to be given to “establish a properly cohesive and coordinated national cyber security strategy” with more collaboration between department, with the private sector, and more planning to deal with a major cyber attack.

Irish spending on defence (0.3 per cent) was the lowest in the EU and Defence Forces numbers, currently were a little over 9,000, needed to be 10,000, according to the paper.