Explainer: What happens if one of the parties vote against coalition?

If the coalition proposal is spurned by any party, then senior politicians will be compromised 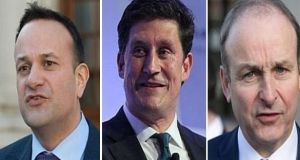 Each party will count the votes on Friday and the result should be known by early evening.

What is happening with government formation?

The three parties who agreed a programme for government are balloting memberships to determine if they will back the proposed coalition of Fianna Fáil, Fine Gael and the Green Party.

In Fine Gael, the vote is weighted in favour of the parliamentary party, which has 50 per cent of the voting share. With TDs and Senators already unanimously backing the deal, it’s as near as you can get to a foregone conclusion.

Fianna Fáil’s 14,500 members will decide its position. There are some in the party who feel very uneasy about a coalition with Fine Gael, which they believe will result in a collapse of identity. Others are suspicious of the Greens but some of their fears have been allayed by the strong commitments on Reps (Rural Environment Protection Scheme) money in the programme. Feedback from constituency meetings is that the 50 per cent threshold will be easily surpassed.

Similarly, the Green Party requires its members to support the programme. But the bar is set much higher, at 66.6 per cent. Three of the 12-strong parliamentary party and some councillors have been involved in a focused and high-profile campaign against coalition, led by Dublin Central TD Neasa Hourigan. Sources in the party accept that the outcome is going to be tight.

When will we know?

The internal elections are being conducted by postal vote so most of the members will have voted by Tuesday evening, if their votes are to be received in time for counting on Friday. Each party will count the votes on Friday and the result should be known by early evening.

And if all three accept?

The Dáil is holding a special sitting on Saturday. If all three back the programme, Micheál Martin will be appointed as taoiseach on the day and some time afterwards will announce his cabinet and 11 nominees to the Seanad. Urgent legislation such as Bills to renew the mandate of the Special Criminal Court and the Offences Against the State Act will have run their passage through the Dáil. That will allow the Seanad to meet on Monday, appoint a new cathaoirleach and pass the legislation to prevent it from lapsing.

And if one of the three does not ratify coalition?

The political system will be thrown into crisis. There are several scenarios that could play out.

Taoiseach Leo Varadkar could try to dissolve the Dáil. He has said consistently that his party is interested only in a stable government involving three parties and not Independents. That is borne from past experience where governments that relied on Independent TDs became increasingly unstable as individuals withdrew support, either over a constituency or national decision that affected their policy areas.

Would that mean an election?

Not necessarily. The State is still in the middle of arguably the worst crisis in its history and the question arises as to the advisability of holding an election when the pandemic is still live. Besides, the decision of the Taoiseach would not be final. One of the few executive powers the President has is conferred under Article 13 of the Constitution. He may “in his absolute discretion refuse to dissolve the Dáil”. If he refused, it would mean that parties would have to re-engage to see if an alternative administration could be agreed. If an election is held, it must be held within 30 days of the Dáil being dissolved.

Are there other looming issues?

Yes. The immediate one is lapsing of the Offences Against the State Act at the end of June. The Special Criminal Court would not be legally constituted. The court is mostly used nowadays for gangland trials. A raft of habeas corpus applications would be expected with the real prospect of a case collapsing or a suspect walking free.

They are all messy. A taoiseach could be appointed and a minority government put in place. It would be a temporary arrangement, unstable and would not last. The others are unpalatable. The bigger parties would start talking to other parties such as Labour and the Social Democrats but neither seem interested in government. Fianna Fáil and/or Fine Gael might also need to effect dramatic U-turns and talk to Sinn Féin. That would raise questions about the authority of, particularly, Micheál Martin. A third suggestion would be a government of national unity involving the three big parties, but that seems a remote prospect.

Every alternative would mean abject compromise and senior politicians falling on their swords.