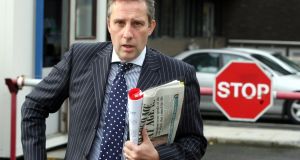 Members of the Belfast Islamic Centre said they have contacted the North Antrim MP to seek clarity on his position on Hopkins’s comment.

Mr Paisley apologised on Monday for retweeting her tweet, which read: “March 2018. London has a higher murder rate than New York... And Ramadan’s not yet begun.”

The DUP representative subsequently apologised to his Twitter followers.

Mea culpa earlier today I glanced at a tweet & rt about # of murders in London. Didn't take cognisance of Ramadan ref. Once brought to my attention immediately deleted. Apologise profusely for offence caused. https://t.co/MGneSXHuMF

March 2018. London has a higher murder rate than New York.....And Ramadan’s not yet begun. pic.twitter.com/VTKUg0etB5

He said: “Mea culpa earlier today I glanced at a tweet & rt about # of murders in London. Didn’t take cognisance of Ramadan ref. Once brought to my attention immediately deleted. Apologise profusely for offence caused.”

The Belfast Islamic Centre said the timing of Mr Paisley’s retweet was “unfortunate”, given anxiety within the community over an unrelated race hate campaign in England urging people to target Muslims.

“We have contacted Ian Paisley MP directly to clarify his position on the controversial tweet and to ask him to confirm his commitment to equality for all citizens, regardless of faith, and his abhorrence of bigotry,” the centre added in a statement.

“We welcome his Twitter apology and the DUP statement condemning it. We extend an invitation to him to come and visit us and meet some of the local Muslim community.”

The DUP is to consider whether to take action against Mr Paisley at its next internal meeting.

“He has subsequently removed it. The original tweet was totally inappropriate and the DUP deplores its sentiments. The party officers will consider this matter at their next meeting.”