Who are the officials leading the Irish response to UK’s departure from EU next year?

Tánaiste and Minister for Foreign Affairs Simon Coveney has said that "there will not be a re-emergence of the physical border because of Brexit." Video: Simon Carswell 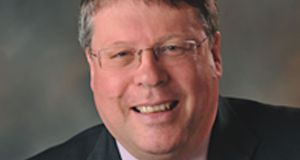 Rory Montgomery: regarded as the “intellectual powerhouse on all things European”.

Most Thursday mornings they meet in the Department of Foreign Affairs and Trade at Iveagh House on Dublin’s St Stephen’s Green. There are no green jerseys here but this is essentially Ireland’s Team Brexit.

Ireland’s permanent representative in Brussels, Declan Kelleher, and the Ambassador in London, Adrian O’Neill, fly in, joining second secretary general Rory Montgomery, head of the department’s EU division, and the rest of the Brexit team he leads.

The meetings are intended to collate the latest information from the negotiations between the EU’s task force, led by chief negotiator Michel Barnier, and the UK, and also to analyse developments in London and Brussels.

Working alongside Montgomery at the Department of the Taoiseach is John Callinan, also a second secretary general who supports Taoiseach Leo Varadkar’s work on EU, Northern Ireland, British-Irish relations and international affairs.

Together, these officials draw on years of experience working in Dublin, London, Brussels and Belfast in their work on the Brexit negotiations.

“You would have intellectual weight but you would also have the drafters, the workhorses and some of the best networkers,” said a former Iveagh House source.

The diplomatic effort has helped create “fantastic solidarity” among other EU member states, said Tánaiste and Minister for Foreign Affairs and Trade Simon Coveney, and made Ireland “one of the key priorities, if not the key priority in the negotiations right now”.

“That hasn’t happened by accident,” he said.

With one year of article 50 negotiations down and another to go until Brexit – and major issues such as the Border still unresolved – Ireland’s “Team Brexit” faces some crunch fixtures in the months ahead.

Earlier this month, Callinan worked through the weekend, liaising with his UK counterpart Oliver “Ollie” Robbins, the EU Sherpa to British prime minister Theresa May, and Barnier before the Monday announcement on the agreement around the backstop that ties Britain legally to a no-hard-border guarantee.

Callinan’s time in charge of the EU division at the Department of the Taoiseach from 2007 to 2011 and his responsibility for Northern Ireland policy and British-Irish relations at the department from 2011 to 2015 serve him and the team well in his key role on Brexit.

He is described as “very experienced” and “very straightforward”.

Once described as “clever and clubbable”, Montgomery would be regarded, said one source, as the “intellectual powerhouse on all things European” at the department along with deputy secretary general Bobby McDonagh. A former ambassador in Brussels and Paris, Montgomery is a popular and highly respected figure among his colleagues.

A graduate of Trinity College, Dublin, where he shared a room with his close friend, the late minister for finance Brian Lenihan, the Dubliner was a member of the Irish team that negotiated the 1998 Belfast Agreement.

As Ireland’s envoy at the EU from 2009 to 2013, he was involved in ratifying and implementing the Lisbon Treaty and the response to the euro zone crisis, experience that will help him navigate choppy waters around the UK’s departure from the EU.

A pivotal figure in Irish backroom Brexit dealings in Brussels, the Leitrim native became permanent representative in Brussels in 2013 after serving almost a decade as ambassador to China. One of the few Chinese speakers in the department, Kelleher’s language skills are matched by his ability to network and eye up opportunities to gain an edge in talks.

Adept at reading the politics around negotiations, he played a key role in securing the backstop deal in December that holds Britain to maintain the status quo in Northern Ireland and an invisible Border if there is no other solution.

“Anything that gets you a step ahead when it is not expected – he is a master at that,” said one diplomat.

He was permitted to stay on in Brussels beyond his scheduled retirement, a rare occurrence, showing his value at a critical juncture in the Brexit negotiations. “He has got some savage connections there,” said one Government source. “He is quite an operator.”

One of the country’s top diplomats, O’Neill served as secretary general to Presidents Mary McAleese and Michael D Higgins before returning to the Iveagh House as second secretary general, heading up the Anglo-Irish division. He took over as Ambassador in London in September as Brexit dominates relations between Ireland and the UK.

As head of the Brexit unit in the Ireland’s diplomatic mission in Brussels, with Kelleher, Deane is responsible for liaising with Barnier’s team. She plays a pivotal role in Brussels making sure Ireland’s approach to Brexit talks are understood by key players in EU institutions and officials from other EU countries feeding into Brexit policymaking within their governments. A former political director in the Anglo-Irish division, she was on the Government’s negotiating team for the Stormont House Agreement in 2014. Her father is the author and poet Seamus Deane.

The Drogheda man is Montgomery’s right-hand man within the EU division at the Department of Foreign Affairs. Director of the EU-UK unit, he is highly regarded for his skill in understanding the technical detail and “getting to the kernel of an issue”, said one source. Stints in Brussels and Strasbourg, and his experience as deputy political director for Northern Ireland at the department feed into his understanding of the complex brief around Brexit.

On long-term secondment from foreign affairs to the Department of Taoiseach, McCullough in her role at the EU section works closely with Callinan, supporting Varadkar on Brexit-related matters in his role as a member of the European Council. She is at a similar level at the Taoiseach’s department as Gargan at Iveagh House.

Parkin leads the Brexit unit within the department’s Ireland, UK and Americas division, better known as I-UKA with Iveagh House and pronounced “eye-you-ka”. She reports to Finglas man Fergal Mythen, another key figure in the department who was until last year head of corporate services in charge of personnel and facilities.