Flanagan to review all aspects of sexual assault trials

Further rallies have taken place in Belfast and Dublin to express solidarity with all victims of sexual crime. 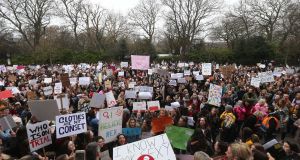 Minister for Justice Charlie Flanagan is to review the legal protection offered to complainants in sexual assault cases, in the wake of the Belfast rape trial.

While the case was tried in Northern Ireland, which operates a different system from the Republic, concerns have been expressed about how trials are carried out in the State.

Speaking to The Irish Times, Mr Flanagan said there was a more robust system in place in the Republic than that in Northern Ireland.

However, he believed it was appropriate to review all aspects of how “such deeply sensitive trials are conducted” and whether further protections should be offered to a victim of sexual assault.

Currently, rape victims act as witnesses in the State’s prosecution but are not entitled to their own legal representation, and this will come up for consideration.

Mr Flanagan said the review would also assess how cases could be dealt with quicker and if additional training was required for members of An Garda Síochána.

The Minister added: “I will commence consultations with women’s groups and the legal profession without delay. I want the Domestic Violence Bill enacted within weeks, and the Criminal Justice Sexual Offences Act and the Victims of Crime Act are being rolled out offering greater protection. I will study what more can be done to protect women and girls.”

Mr Flanagan also committed to updating the national survey on sexual violence, which was last published in 2002, and will convene a special working group to address this gap in information.

A series of protests have taken place across the country in light of the acquittal of Ireland and Ulster players Paddy Jackson and Stuart Olding last week.

Protesters have been demanding changes to the justice system in the North and the Republic to assist victims of sexual assault.

Speaking at an event on Sunday, Sinn Féin leader Mary Lou McDonald said the case in Belfast had raised a number of concerns about how rape trials were conducted.

With regard to Northern Ireland, where this trial was heard, Ms McDonald questioned whether it was appropriate for the accused to be named and whether the public and the media should have had so much access to the court case.

In the Republic, there were legitimate concerns about the legal protection afforded to complainants, she added, and whether that person should have access to legal advice and an ability to cross examine.

“I am saying all of that with absolute respect for the verdict that the jury has arrived at. We need to be careful not to be going down a very dangerous route of second-guessing jury verdicts but, at the same time, I think it was obvious to everyone that the way in which that trial proceeded was pretty appalling.”

The trial resulted in the acquittal of Mr Jackson, Mr Olding and two others. Solicitors for the two men have said they were monitoring online comments about the rugby players, in light of the verdict.

Questions have also been raised about the commentary on social media while the case was ongoing.

Minister for Culture Josepha Madigan has proposed new laws making it a statutory offence to comment on an ongoing criminal case, and for contempt of court charges to stretch to social media.

Ms Madigan told The Irish Times yesterday she wanted this legislation to move forward as soon as possible.

In response, the Minister for Justice said people needed to be reminded that social media was “much more than an informal chat forum and that defamation laws strictly apply”.