Theresa May says visiting Border not a priority ahead of Brexit

British Prime Minister Theresa May said on Thursday (March 29) that border issue between Ireland and Northern Ireland after Brexit is being "worked on". 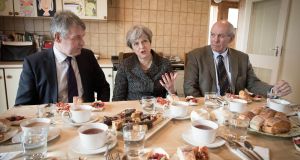 The British prime minister has declined to commit to visiting the Irish Border before Brexit.

Theresa May suggested it was more important that she understood the issues related to the Border than to see it in person.

Ms May and senior cabinet colleagues have faced criticism for not visiting the 500km frontier since the Brexit referendum, despite its fate being one of the crucial issues in the UK’s exit negotiations with the EU.

On the third leg of her whistle-stop tour of the UK on Thursday, Ms May visited a farm between Bangor and Belfast in the constituency of north Down.

The Jackson family farm sits more than 50 miles away from the nearest section of the Border.

Ms May was pressed on why she had not taken the opportunity to visit communities closer to the Border, given the acute concern held by many in that area about Brexit.

“I absolutely understand how important this issue is for people generally in Northern Ireland but obviously particularly for those who are living close to, and in some cases, may have homes that are across the Border,” she said.

But the prime minister declined to give a commitment to visit the border before the UK leaves the EU.

When asked whether she would be prepared to go to the Border in the next 12 months and see for herself the potential issues concerning people, Ms May replied: “My diary over the next year hasn’t yet been set, but all I am saying is I understand.

“I think it’s not a question of just whether I actually go and stand on the Border, it’s a question of do I understand the impact that has for people?

“What I am doing here today is actually listening to farmers here in Northern Ireland.

“Listening to representatives of the agri-food industry, hearing what they want to see coming out of Brexit, what are the opportunities for Northern Ireland in the future.

“That’s what I have been doing.”

Earlier, Ms May sat down for lunch in the Jackson family’s farmhouse with representatives of the Ulster Farmers’ Union.

She heard of concerns within the agriculture industry about Brexit’s potential to impact on the free flow of goods across the Border.

Farmers’ representatives also stressed that they did not want a new border created in the Irish sea, obstructing important trade links with Britain.

“I think one of the things that will come out of Brexit is the opportunity for agriculture here but across the UK to really – out of the CAP [EU’s Common Agricultural Policy] – to set our own way of doing things,” she said.

She told fellow guests at the lunch that on a recent visit to China she had learned of potential opportunities for milk exporters in the UK.

“There’s lot of opportunities to find ways of doing these things,” Mrs May said.

The prime minister added: “We are absolutely committed to ensuring there is no hard border between Northern Ireland and Ireland to ensure that free flow.” – PA