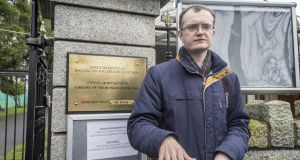 Russian embassy spokesman Vasily Velichkin: “In response to their unjustified expulsions of Russian diplomats based on Britain’s proof-free accusations of Russia related to the Skripal case, it should not come as a surprise.” Photograph: Brenda Fitzsimons

Russia on Friday expelled 59 more diplomats from 23 countries – including one from Ireland – as relations between Moscow and the West continue to deteriorate to their lowest ebb since the cold war.

The move is a continuation of the Kremlin’s retaliation for the expulsion of Russians from embassies across the West in the wake of the poisoning of the former spy, Sergei Skripal, and his daughter, Yulia, in Salisbury, England, earlier this month.

The Irish Ambassador in Moscow, Adrian McDaid, was summoned to the Russian foreign ministry in Moscow yesterday and informed that one Irish diplomat would be expelled from Russia in answer to the Irish expulsion of a Russian diplomat earlier this week.

The person to leave the Moscow embassy was identified by Russia and has been given until April 9th to leave the country. The Department of Foreign Affairs said last night that it would not be releasing the official’s name.

A spokesman for Tánaiste and Minister for Foreign Affairs Simon Coveney said on Friday afternoon there was no justification for this expulsion.

“Irish staff do not engage in activities that are incompatible with their diplomatic status. This decision to expel an Irish diplomat is regrettable,” the spokesman said.

Moscow continues to insist it was not responsible for the attacks on Mr Skripal and his daughter, with domestic media portraying the events as a plot to damage Russia. The denials are widely disbelieved by western governments.

Following intensive diplomatic and political activity by the UK among its allies, 29 countries announced earlier this week that they would tell 145 Russian officials to leave in solidarity with the UK – while Nato also ordered 10 Russians out of its mission in Belgium.

On Tuesday, Ireland ordered one Russian diplomat to leave after a security review signalled concerns about their activities in Ireland.

Those countries have now seen equivalent numbers of their diplomats expelled from Moscow. The UK, which expelled 23 Russian diplomats in the wake of the poisoning, has been ordered to reduce its mission in Moscow to the size of the Russian delegation in London.

The US said it had been expecting the move and warned it may take further action.

“They were handed notes of protest and told that the Russian Federation declares persona non grata the relevant number of diplomats from these countries working in diplomatic missions in Russia,” he said.

“In response to their unjustified expulsions of Russian diplomats based on Britain’s proof-free accusations of Russia related to the Skripal case, it should not come as a surprise,” he said. “We completely reject the underlying notion of the Irish action that Russia is somehow involved in the Salisbury incident.”