‘Huge insult’ not to be told about Seanad snub, says Marshall 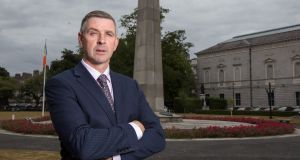 Former president of the Ulster Farmers’ Union, Ian Marshall, was elected a senator in a 2018 byelection. File photograph: Patrick Bolger/Bloomberg

Former senator Ian Marshall has expressed his disappointment that he learned that he was not being nominated to the Seanad for a second term via social media.

It was very significant that there was now no unionist voice in the Seanad and the “entire unionist community in Northern Ireland” felt let down, he told RTÉ radio’s Today with Sarah McInerney show.

Mr Marshall, a former president of the Ulster Farmers’ Union, said he had not received an explanation why he was not included in the Taoiseach’s 11 nominees. He had been expecting a call on Saturday and found out he had not been nominated when he read a tweet by a journalist.

“It was a bit of a shock that there was no call.” He said he had been brought up to have manners and show courtesy and he felt it was “a huge insult” to hear that he had not been nominated through social media.

“I’m not sure who made the decision. The silence is interesting, no one is taking ownership.”

The “optics” did not look good, he said. He had come under a lot of criticism when he took up the Seanad seat in 2018 and had been warned it was “tokenism”, but he had reassured the critics that the Seanad “was not a cold house for unionists”.

He said it set a bad example that the one unionist voice in the Seanad was gone and he had experienced a “tsunami of reaction”.

“I never chased this. I wanted to make a chance. I took the opportunity, I made a leap of faith.”

Deputy First Minister Michelle O’Neill said on Monday it was “very unfortunate” there was no unionist or northern appointment among the Taoiseach’s nominees.

Ms O’Neill described Mr Marshall’s previous election in 2018 byelection as “something that was very positive and very engaging and something that’s right and proper as we plan for what the future looks like here on this island.

“I certainly think it’s disappointing that one of the very first actions this new government has taken and it’s ignored the people of the North.”

Sinn Féin Senator Niall Ó Donnghaile is the only member of the Upper House from Northern Ireland. He is a former member of Belfast City Council and has been a member of the Seanad since 2016.

The Taoiseach’s nominees were split between the parties forming the new Government, with Fianna Fáil and Fine Gael nominating four each, two for the Green Party and one Independent.