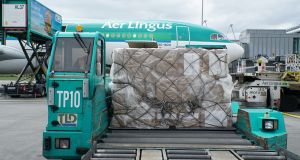 Ann Derwin moves to Beijing at a critical time in relations between the countries when the supply of personal protective equipment from Chinese manufacturers is essential to the State’s fight against Covid-19 and as China becomes a more important trading partner and destination for exports. Above, a shipment of PPE arrives from China to Dublin Airport. Photograph: Enda O’Dowd

Former vet and one-time chief economist at the Department of Agriculture Ann Derwin is to become Ireland’s next ambassador to China.

Ms Derwin, who is currently assistant secretary general at the Department of Foreign Affairs, has been nominated to replace Eoin O’Leary as the State’s chief envoy in Beijing.

Ms Derwin has served overseas in the past; she was agriculture attaché in Spain before returning to become chief economist at the Department of Agriculture.

She was the first woman to be appointed to the management board of that department.

Mr O’Leary is moving to Vienna to become ambassador to Austria at the end of his three-year stint in China.

He is taking over from Tom Hanney who became Ireland’s permanent representative at the European Union in Brussels replacing veteran diplomat Declan Kelleher who retired in March.

Ms Derwin will become the 10th envoy in Beijing since Ireland established diplomatic relations with China in 1979. She is the second woman to serve in the role.

She moves to Beijing at a critical time in relations between the countries when the supply of personal protective equipment from Chinese manufacturers is essential to the State’s fight against Covid-19 and as China becomes a more important trading partner and destination for exports.

Ms Derwin, who is originally from Sligo, has a masters in agricultural economics from Imperial College London and a doctorate in governance at Queen’s University Belfast.

In her current role at the Department of Foreign Affairs, Ms Derwin is in charge of the global Irish services division, overseeing the department’s diaspora, consular and passport services.

Her appointment is being made as part of a routine round of new diplomatic assignments to be officially announced shortly.