SF leader McDonald critical of FG, FF and Labour for ruling out coalition with her party 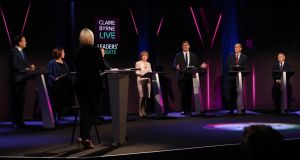 Political leaders clashed on the issues that have dominated the general election campaign to date - housing, crime and living standards - during Monday night’s seven-way leaders’ debate on RTÉ.

The debate, moderated by broadcaster Claire Byrne, was held infront of a live audience in the National University of Ireland, Galway, where calls for a rent freeze and attacks on so-called vulture funds drew applause.

Fianna Fáil leader Micheál Martin said his party in government would build social and affordable housing on State land and that “a commitment to building affordable housing just hasn’t been there” from the outgoing Fine Gael-led Government.

However, he was attacked by Ms McDonald, who claimed Fianna Fáil had co-authored the housing crisis because of the confidence and supply agreement, which has seen it underpin the minority administration since 2016.

Mr Varadkar defended his party’s Help to Buy Scheme, which sees the State give first time buyers an income tax refund to help them get a mortgage deposit.

“A number of people who are paying very high rent but could afford a mortgage if only they could get a deposit. I think it is a good economic policy and a good social policy to help people buy their own home. We have already doubled the supply of housing, and I can double it again,” he said.

Mr Ryan said the polices of Fine Gael and Fianna Fáil - which is proposing a savings scheme for first time buyers - mean “you might as well give the cheque to the developer”. He called for cost rental housing to be delivered.

Ms McDonald said “you can’t walk the length of yourself out on the campaign trail without hearing stories of real trauma” from people unable to buy a home or experiencing housing problems.

“An incoming government needs to accept this is an emergency,” she added, calling for 100,000 public houses be built.

She also called for a rent freeze, as did Mr Howlin who said between 80,000 and 100,000 social and affordable homes should be built.

The debate followed the head to head between Mr Varadkar and Mr Martin on Virgin Media One last week. There will be another seven way debate on Virgin Media One on Thursday, moderated by Ivan Yates and Matt Cooper, with Mr Varadkar and Mr Martin squaring-off in a final debate on RTÉ One on Tuesday, February 4th, just days out from polling day on February 8th.

Speaking after the debate, Mr Howlin appeared to change his position on going into government with Sinn Féin.

“I am happy to sit down with Sinn Fein,” he said.