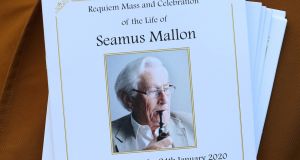 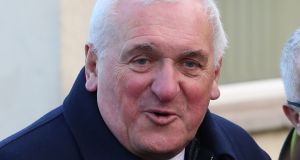 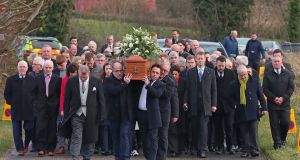 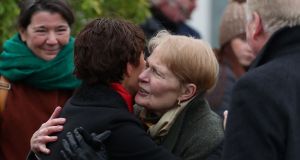 Seamus Mallon got a great send-off in the little chapel with the great name of St James of Jerusalem Church in the parish of Mullaghbrack in Co Armagh, just outside his home town of Markethill.

As Fr Michael Woods, the parish priest of nearby Tandragee, told the congregation at noon on Monday, it was where he was baptised just over 83 years ago. It is also where his wife Gertrude was buried in 2016.

The cover of the funeral Mass booklet carried a characteristic photograph of Mallon with a pipe in his mouth and a reflective look on his face. Notwithstanding that he hadn’t smoked for many years, the picture caught him well.

On the back was a quote from Seamus Heaney’s The Canton of Expectation: “To know there is one among us who never swerved from all his instincts told him was right action, who stood his ground in the indicative, whose boat will lift when the cloudburst happens.”

Everyone present knew Mallon as a man who always stood his ground.

The beautiful Mass of music, prayer and remembrance was put together by his daughter Orla, but on his instructions in his final days.

At the end of the service he wanted The Bard of Armagh to be sung, he told her.

“Do you have anybody in mind?” Orla asked.

“Well, nobody sings it better than me,” he replied.

It was left to another teacher and friend, Joe Cullinane, to sing – which he did well – the bittersweet song of love, loss and recollection and how “merry hearted boys make the best of old men”.

That too was characteristic of Mallon, a man who outside politics lived a full life with a twinkle in his eye from youth to venerable old age, whether on the Gaelic football pitch or the amateur stage; fly fishing or at the races; or singing a ballad and sipping a whiskey.

Some of that was reflected in the presentation of gifts to represent his life: Andy Pollak who collaborated with Mallon in writing his autobiography, A Shared Home Place, brought that book to the altar – the title reflecting the type of Ireland he strove for.

Or as the chief celebrant, Archbishop Eamon Martin, the Archbishop of Armagh and Primate of All Ireland, expressed it, “A fitting tribute to the legacy of Seamus Mallon would be a renewed effort by all our political leaders and by all of us to build that ‘shared home place’ which was Seamus’s vision and lifelong project.”

In the prayers of the faithful, Mallon’s granddaughter Lara prayed that “the children in this country may be free to be friends with all”.

Also among the gifts were his maiden speech to the House of Commons in 1986, a photograph of him with Pope John Paul II, and golf balls from the golf club in Rosapenna in Co Donegal, a place which for decades was a bolthole for Orla and for him and his late wife Gertrude from the travails of political life.

There was a big turnout for the funeral, the Mass said in the church, and transmitted also to the community hall beside it and to a specially erected marquee across the road.

There was one serving and two former taoisigh present, Leo Varadkar, Enda Kenny and Bertie Ahern. The current First Minister and Deputy First Minister Arlene Foster and Michelle O’Neill sat together in the church, and also present was the first first minister, David Trimble with whom Mallon had a lively, occasionally prickly but ultimately productive relationship as they tried to anchor the now restored Northern Executive and Assembly.

There were senior representatives from most parties North and South with, naturally, the SDLP most strongly represented. With so many figures from the past chatting afterwards outside the church the inescapable sense was one of nostalgia and the passing of an era.

Old stories were retold, including how graffiti saying “Hang Seamus Mallon – f**k the Pope” appeared on a wall outside the Mallon home and how Mallon’s take on it was that he always felt he got “the better part of the deal”.

The Archbishop told the congregation that Mallon was a “peacemaker, a bridge builder, a leader, a statesman and a faithful worker for the Kingdom of God”.

“He empathised from his heart with all those who were suffering and his consistent condemnation of violence from whatever source often left him open to insult and unfair criticism,” he said. “But his principles, rooted in a strong faith and in an unstinting commitment to a culture of life, remained steadfast in face of such opposition.”

Mallon’s great friend, the former senior Irish diplomat Tim O’Connor, in delivering the final reflection of the service said they were all saying “farewell to a great chieftain of Irish political life”. He described Mallon as a “giant of his time” who was as “an outstanding orator and parliamentarian” ranking alongside O’Connell and Parnell.

And O’Connor too referred to the title of Mallon’s autobiography by citing his “commitment to the shared home place, founded on peace, mutual respect and friendship”.

“Our prayer today,” he said, “in this beautiful church is that the future of our island, North and South, will be defined and shaped by that legacy.”