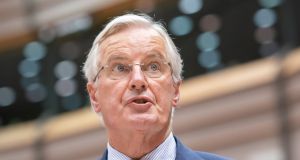 EU-27 ambassadors were briefed by EU chief negotiator Michel Barnier on the talks that have continued over the weekend in a restricted secret session. Photograph: Jasper Juinen/Bloomberg

Expectations that an elaborated Brexit deal can be put to EU leaders at this week’s summit were fading yesterday.

There is no deal yet and the leaders at the European Council may only hear a report suggesting talks progress is under way and that they may need to extend up to close to the Brexit date of October 31st.

Last night, the British prime minister Boris Johnson told his cabinet there is still a “significant amount of work” to do but he insisted that there is “a way forward” that could “secure all our interests”.

EU-27 ambassadors were also briefed by EU chief negotiator Michel Barnier on the talks that have continued over the weekend in a restricted secret session. Any package for the summit was supposed to go from them to capitals and then to a ministerial meeting in Luxembourg on Tuesday charged with preparing the summit agenda. EU officials insist that the European Council can only approve an elaborate, “legally operable” text.

Mr Johnson is expected to meet the German and French leaders over the next two days.

Although EU and UK officials remain tight-lipped about the shape of the new British proposals, there is a confidence here that an acceptable backstop would involve the North of Ireland leaving the EU customs union while the UK operates customs checks on the Irish Sea on the EU’s behalf (ie within its own customs union).

How the vexed issue of “consent” will be dealt with remains unclear, although commission officials insist that “consultation” with the Northern Ireland Assembly on regulatory rule changes is possible.

Brussels sources are deeply sceptical that any deal, even if it can be agreed in outline, can be sufficiently elaborated in time to be put to the leaders’ summit on Thursday – let alone for approval in the Commons on Saturday. The Benn Act requires a vote on a substantial, finalised agreement if Mr Johnson is to avoid the necessity for asking for an extension.

‘Up to the Brits’

Leaders at the summit might be willing to indicate that, if a request for an extension were forthcoming on Saturday it would not be considered closer to the end of the month. That would allow Mr Johnson to continue to claim that Brexit on October 31st remains on the cards.

There is little doubt that if requested an extension will be granted.

“It’s up to the Brits to decide if they will ask for an extension,” Mr Juncker told the Austrian newspaper the Kurier on Sunday. “But if Boris Johnson were to ask for extra time – which probably he won’t – I would consider it unhistoric to refuse such a request.”

In considering an extension leaders will, however, be insistent on hearing a guarantee that it will be used for an election, as well as plausible assurances from Mr Johnson that a contemplated deal would achieve a majority in the Commons. Straws in the wind in this regard were to be seen in the UK on Sunday, not least the appeal by arch-Brexiteer minister Jacob Rees Mogg who wrote in the Sunday Telegraph that “compromise will inevitably be needed”.

Mr Rees-Mogg joined a number of senior Tories in seeking to soften Tory Eurosceptic MPs by urging them to accept that “as a leaver Boris can be trusted. He wants to take back control and has dedicated his political career to this noble cause”.

Brexiteer Home Secretary Priti Patel told the Andrew Marr Show that the “Government number one priority is to secure a deal”.

There is concern here about the position of the DUP and whether its scepticism about the proposed customs arrangements means that the party will vote against.

On the Labour side, there was growing confidence that the party could attach an amendment requiring a referendum to any deal Mr Johnson might put before the Commons on Saturday. Shadow business secretary Rebecca Long Bailey, who is seen as close to leader Jeremy Corbyn, admitted to Marr that she had changed her position and now supported a referendum.

Sir Keir Starmer, the shadow Brexit secretary, told a conference on Saturday: “If Johnson does manage to negotiate a deal . . . then we will insist that it is put back to the people in a confirmatory vote. If he can’t – or I should say won’t – get a deal . . . we will take whatever steps are necessary to prevent our country crashing out of the EU without a deal.”